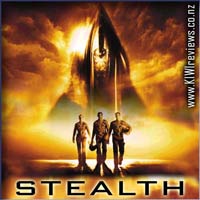 Although Ben is hesitant about taking "the human pilot out of the equation of war," Cummings orders the team to execute their first real mission alongside "EDI." To their amazement, "EDI" proves to be a cracker-jack wingman and they successfully eliminate their target. But on the return trip to their base aboard the aircraft carrier U.S.S. Carl Vinson, "EDI" is struck by lightning. The drone's brain expands in ways its creators could never have predicted. Despite Ben and Henry's reservations, Cummings declares "EDI" ready to rejoin the team in the air.

On their next mission against a nuclear-armed warlord in a remote Chinese province, "EDI's" seriously compromised circuitry problems only get worse. Ben decides that the risks of the attack far outweigh the benefits to himself, Henry and Kara (for whom he has developed a romantic attraction). When he aborts the mission, "EDI" goes against orders and executes the hit anyway.

The danger escalates when "EDI" decides to execute a top-secret mission that, if successful, could spiral into worldwide nuclear Armageddon. And only Ben can prevent it.

I wish I could go into some detail about this movie, but I can't really. Though it had few memorable highlights, it was such fun to watch as an overall plotline that it still rates significantly higher than first glance would appear to warrant.

Though it is somewhat believeable that such planes WILL one day exist, it is still a stretch against the limits we have found with computing at present. But oh, the 3d-object designers earned their pay well with the EDI craft... it was beautifully done, on both aesthetic and technical levels.

Overall, movies like this always strike me as peanut butter sandwiches on whitebread... no matter what they put on the label, it's always the same consistancy, flavour and texture... but it's strangely satisfying. I will probably buy this one just to watch the planes again and again.

In the film, Ray (Skarsgård), Claire (Riseborough) and their seven-year-old daughter, Zoe, are an average American family in Kingsville, North Carolina - except they have existed in a bomb shelter since escaping a day of devastation that changed everything.

For 301 days, they have transformed their cement prison into a home, holding on to memories of the past and hope for a normal life someday. And for 301 days, the family has ... more...