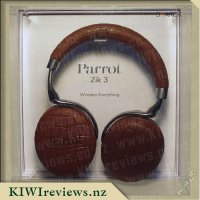 Everything a pair of headphones should offer: beautiful, wireless, intuitive, technological, compatible with all 'modern' devices like smart watches. Zik 3 is the newest generation of Parrot's wireless music and telephony headset.

Superior Sound
To ensure music is heard in all its harmony and depth, Parrot Zik 3 audio playback offers a digital 32 bits audio processing. The frequency of the signal is fully customisable with the 5 band Pro-equalizer available on the free and specially designed app Parrot Zik.

3D Soundscape
The Parrot Zik 3 is designed around a powerful processor that spatializes sound and recreates the acoustics of different listening environments.

Artist Settings
The Parrot Zik 3 offers the possibility to personalize the audio restitution of each song. Users can download presets and listen to music as intended by the artist.

Auto Adaptive Noise Canceling
Parrot offers a new noise control technology that is extremely effective, and adapts to your environment. Disturbing noise is eliminated, whether you are in the office or in public transport, for uncompromised listening comfort.

Smart Touch Panel
The Parrot Zik 3 is fitted with an ultra-intuitive panel on the right ear cup: Slide your finger horizontally to skip to the next track, slide your finger vertically to adjust the volume, or take off your Zik 3 and the music stops!

One of the biggest annoyances when wearing headphones is audio bleed-through from the outside world. When all you want to do is get lost in some good classic Bowie, Dire Straits, Beatles or even some surreal tunes from Engima or The Doors, nothing is more frustrating and distracting than hearing the neighbour's dog having a chat with his mate 2 block away, or the idiot "boy racer" two streets over trying to figure out how to leave as much of his tyres on the road as possible. So... a full-ear cup, active noise-cancelling and plenty of volume are essentials in a set of headphones for the quality audiophile. Hello, Zik 3!

I wear glasses. It's not a style choice, it's a necessity, so I usually go for earbuds but they often irritate my ears so I spend a fair amount of time missing good bits of songs while I shove my pinky finger into my lug-hole to scratch a phantom itch. Keeping that in mind, I was a little hesitant when I discovered I was about to review a set of full-on headphones. 10 seconds after I put them on, I was sold. They sit tight enough to remain stable while you move your head - within reason, no headbanging please - yet loose enough that they didn't press the arms of my glasses into my temples and slowly drive a screaming headache into being.

Deciding to take these with me on a recent road-trip, I found myself sitting in a crowded McDonald's store chugging away on my laptop, blissfully unaware of the masses of people around me while I grooved to my 'working away from the office' compilation consisting of some Enigma, some Doors, a bit of Ziggy Stardust and a whole lot of Sisters of Mercy. The wide variation in soundscapes, both in the music and the environment in which I was located, gave the active noise cancelling a real workout. While it didn't always keep track, it did one of the best jobs I have ever come across and there were very few 'noise breakthroughs' to distract me from my labours. Once I started to play around with the free companion app though, and found I could set the level of noise cancellation, well... that was a revelation! I was soon totally surrounded only by the noises of my own choosing.

One of the things that took me the most to get used to was the touch-sensitive control panel that covers the outer face of the right ear-pod. It's fairly intuitive, but still took some getting used to mainly because I am not used to such things and habit had my thumb reaching for the controls on the headphones that I usually use at home when I am chilling out - I don't tend to wear my glasses on those occasions. Once I started to remember that the controls were a touch-pad, it became very easy to jump between tracks, adjust volume, pause and restart music. The simplest way to pause, of course, is just pop the headphones off - they trigger a pause command on your linked device so you don't miss anything. Genius.

Battery life was pretty average though, and because I didn't have a wireless recharger, I had to cable it up to my laptop after a while. This rapidly became annoying, as the cable either got in the way of my typing or mousing, depending which USB port I used... so in the end I gave up and just slapped it on my main charger and tried to keep working while listening to drunken idiots harassing staff, Asian businessmen having loud conversations in their native tongue, and teenage girls giggling madly over some trivial teen YouTube hear-throb of the day. That lasted about 10 minutes before I gave up on that too and went and sat out in my car to work.

The next day, I found myself with time to spare while I wandered around a crowded show, so I re-paired the headset with my phone and made a few calls. I found the incoming sound was crisp and clear despite there being a considerable amount of background noise. The sheer volume was enough to break through even the highest setting on the noise-cancelling, but what little bled through was so trivial as to be hardly worth mentioning. However, the microphone on these wasn't quite as good, and the people I was calling had some trouble hearing my voice, instead getting a decent chunk of the background noise instead. So, while these are great for your ears, if you are in a noisy environment I don't recommend accepting any inbound calls unless you can get somewhere a little quieter. I was able to get to a relatively quiet spot in the building for one call, and it was quite acceptable, which reaffirmed my theory that the biggest issue with this test was the insane level of noise in the show, and not really a fault of the hardware.

One hiccup I did find was with the re-pairing... the manual doesn't really explain how to force the headset into pairing mode again, after it has become paired with a device already. This is nothing new at all - it's an issue I face regularly with bluetooth audio devices like my car's hands-free kit or my own bluetooth headset. I had to spend some time trawling through Google to find the process for telling the headset 'Forget everything and start again from scratch, you infernal device!' So... beware of changing between paired devices. If your smartphone is also your MP3 player, then you'll be fine - in the app, choose "Street Mode" for the best balance of noise-cancellation. Otherwise, be aware that even though the headset is always in pairing mode when no active connections are in force, your device may take a couple of scans to locate it. My thoughts on this are that it may have some trouble connecting to new devices if it has less than 80% battery.

Also, despite many attempts on the day, I could not get the NFC connectivity to work. My phone has NFC capabilities, and I know they work because I was using that feature regularly throughout the two days of the show, so I know it wasn't my phone. That would have solved the re-pairing issue quite handily. Again, I suspect this is linked to battery levels - later testing showed that if the battery level was below 80% I had trouble generating new connections but an existing pairing was able to be resurrected easily as long as the battery was above 20%.

Overall, I was quite impressed actually. Not having trialled the previous model, I can't speak as to how this model is better or worse, and since I don't do comparison reviews, you'll just have to take my word for it when I say that if I had the choice I would switch away from my usual headphones to these in a heartbeat. However, the price tag puts these firmly in the 'serious audiophile' range, and well out of the budget range of your average Joe. Still, if you have the money, and want something pretty remarkable, this is one that should be forefront in your buying radar.

Go further without wires
With Bluetooth technology, you can use your phone or tablet to stream your music wirelessly. Take your Mobile Boombox everywhere you go, then pair it with your friends' phones and let them add their music to the mix. Switching between devices is as easy as pressing pause on one and pressing play on another.