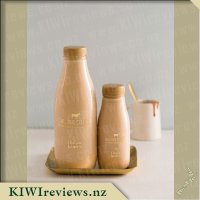 Take your taste buds back in time and enjoy the indulgent flavours of deep golden caramel and old-fashioned butterscotch. Fresh Double Caramel Milk has been created in collaboration with one of New Zealand's favourite foodies, Chelsea Winter. Together, Chelsea and Lewis Road founder Peter Cullinane, have developed a rich and creamy milk that delivers a double dose of nostalgia with every sip.

The recipe blends our pure, permeate-free whole milk and two distinct caramels - a deep, golden caramel and a butterscotch. Created in the Lewis Road kitchen in small batches, the challenge was then to scale the recipe for all of New Zealand to enjoy, without losing that special, home-made taste.
Mission accomplished. The final product uses only real, old-fashioned ingredients, so no numbers, artificial flavours, colours or preservatives. Enjoy!

I remember oh so clearly the hype of the Lewis Road chocolate milk - especially because it was available in the North Island a looooong time before it was available in the South! Once it finally came this way I was lucky enough to find a bottle (which was no mean feat in itself considering shops kept selling out thanks to the hype the product had received from the North Island) and I was won over instantly! Since trying the chocolate I had also tried the vanilla but was not a fan of this one. So once I heard about the caramel milk (which was only the day before it was released - not sure how I missed the news on that one) I was definitely keen to try it. Popping into Countdown one Friday evening I went into the chiller to see it sitting there on the shelf. There were no big 750ml bottles so had to settle for the smaller sized bottle. Making sure hubby didn't miss out I had to buy two - it was around $8 for both which I think is a bit pricey for some flavoured milk however I just HAD to try it - and that's how they manage to sell it!

We decided to save the milk as a bit of a treat after dinner. As I opened the bottle I could smell the caramel - it smelt absolutely devine! I knew if the milk tasted even half as good as it smelt it would be amazing. I took the first sip - o - m - g! Just amazing! It was the right amount of caramel, the right amount of sweet - the right amount of anything. I really enjoyed the chocolate flavoured one, but this caramel blows it out of the window! Luckily I only bought the small bottle as I think I would've sculled down the big bottle then felt a little ill after all the milk afterwards! There was no leaving anything behind in this bottle, it was far too good for that!

I recommend this to anyone who loves milk and caramel. Chelsea Winter and Lewis Road - you have a winner right here!

I was lucky enough to win some 750ml bottles of Lewis Road Creamery Fresh Double Caramel Milk which has been created in association with Master Chef Winner, Chelsea Winter. The milk is a rich caramel colour and comes in a clear, hard plastic bottle with the 'Lewis Road Creamery' brand prominently standing out in gold. You can see exactly what you are getting and quite frankly, I liked the look of it!

The milk consists of good quality pure whole milk (obviously!), 9% caramel sauce and 7% Butterscotch sauce and before trying, I gave the bottle a good shake to mix up the settled caramel sauce that was on the bottom. The milk was velvety smooth with a decadent caramel flavour and very sweet! Judging by the nutritional value on the bottle, thatâ ™s not such a bad thing! According to the label, a 750ml bottle will give you three 250ml serves which consist of 1350kj, 18.1g fat (13.7g saturated) and 29g of sugar. It does give you 32% RDI of Calcium so itâ ™s not all bad! You can tell that quality ingredients have been used and I would say that smaller servings would be just as sufficient and satisfying.

It doesnâ ™t mention that you can freeze it but I undid the lid, emptied out 100ml and put the bottle in the freezer so I can use some for baking at a later day (if it lasts that long!) I think it would make a gorgeous ice-cream or cheesecake and am looking forward to using with some Baileys. I have seen the price in the supermarkets and it may seem a little high compared to other brands but I would class this as a luxury treat that is worth every cent!

Like the release of the other flavoured milks in the Lewis Road Creamery range the new Fresh Double Caramel Milk had a lot of people hyped up about it waiting to try it. I was a fan of the Lewis Whittaker Chocolate milk they had released, however not so much of the Vanilla milk so I was interested to see how this one was going to compare. To create this milk Lewis Road Creamery had teamed up with Master Chef Winner, Chelsea Winter! Being a huge fan of Chelsea Winter's recipes I was excited to see how this milk was with the added touch of her very own caramel and butterscotch sauce recipes!

The milk is available in 2 sizes, 300mls and 750mls and can be quite pricey depending on where you go to get this from, however I managed to find this at Pak n' Save for $5.69 for the 750ml bottle which I thought was pretty good. The milk comes in a plastic bottle which has 'Lewis Road Creamery' embossed around the top of it, the rest of the writing has been done in a gold foil, with some fancy fonts. The bottle is clear so you are able to see exactly what you are getting before purchasing. The milk was a rich golden colour (obviously not overly dark to the addition of the milk) but it still represented a colour you would expect from a caramel milk. At the bottom of the bottle there was a layer of thick caramel sauce which took several shakes to get mixed in properly.

Being made with a high quality milk the texture of this drink was smooth and creamy and very easy to drink. The flavours of the caramel and butterscotch were divine and in my opinion it tasted a lot more of butterscotch than it did caramel. I had seen a lot of people on Facebook saying that it tastes like Werther's Originals and this is pretty spot on, it is very similar in taste to these. A very delicious milk, though I found it to be rather sweet so was unable to drink much at a time. You could certainly tell that the ingredients consisted of those which are high quality, you were left with a taste of a real caramel or butterscotch sauce,rather than an artificial, fake taste. My partner absolutely loved this and he is not a big milk drinker, nor am I!

While delicious to drink on it's own, I would absolutely love to try it out in baking, such as to make a caramel mud cake or cheesecake in place of plain milk as I wonder if we provide it with a extra hint of caramel flavour? This is certainly something I plan to try out! Yes, the price is a little steep I must admit but if you have enjoyed the other flavours in the Lewis Road Creamery range you should give this a go, personally I think it's the best one yet!