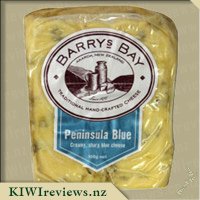 It's a good thing I am single and live alone, because this cheese is a ripe blue alright. I had some on toast as part of breakfast one day and for the first hour or so of the day no-one wanted to talk to me face to face even after I brushed my teeth twice. For that alone I love this cheese, because I work with a bunch of muppets most days. hahah.

I really like the taste of blue cheese, but even I found the smell to be quite rich and powerful. It's a sign of a good cheese I think, and it wasn't unpleasant for me, just strong. The texture was pretty good, it was soft but crumbled easily so I could put some on top of the boss's pie when he wasn't looking. He got the shock of his life which made us all laugh, but when he wanted to know who the joker was I thought my days were numbered. I owned up of course, and was really relieved when he said he really liked it, and wanted to know where could he get some. He's told me I can stick with the reviewing stuff as long as I want because I have introduced him to some great products through doing KIWIreviews.

I did think the price was a bit higher than I would pay for a blue cheese normally, but it really is such a nice cheese that I would pay it, but I wouldn't treat it like I would a cheaper cheese. Even the few crumbs I put on the boss's pie had me seeing dollar signs flying away, and I got the cheese to review for free!

Damned nice cheese, and I'm now kicking myself I only went for the one, because if this is the level of cheese Barrys Bay put out, the others must be pretty amazing too. Gonna have to hunt for them next time I get near a supermarket, because the little roadside dairy just down the road sure as heck doesn't stock anything fancier than steak and mushroom pies.

A friend was visiting yesterday and she can't stand blue cheese. In fact, whenever it is put on the same platter as another cheese, she will protest! I took Barry's Bay Peninsula Blue cheese out to taste and review last night and she decided that she would help me to review it. She was very surprised that she actually liked it. She didn't think that it was too much like blue cheese. She went back for several servings of the cheese. I actually wished that she had gone back to her original stance as I didn't want all my beautiful blue cheese to disappear!!

I absolutely LOVE blue cheese and I was very excited to be able to taste this blue cheese. My impression of the cheese was rather different to my friend's. I thought that it had a very strong and sharp blue cheese flavour to it. I really liked it. It also had the combination of smooth and gritty texture that I link with the better quality blues that I have experienced in the past. There is something about eating a product that is handcrafted. I think that it is much nicer than eating a mass produced product.

I have enjoyed this blue with thin slices of french bread, crackers and by itself. I think that I would love this cheese regardless of how I served it. I often use blue cheese in pasta, spinach salads, pizza, etc, and I know that this would work really well in any dish that I would typically use blue cheese in. The only thing for me is that it tastes so good that I really would be most likely to keep it in its state straight out of the packet and serve it on crackers etc or simply eat it in chunks all by itself!! As a child, you could not get me to even get within 10m of blue cheese. I always thought my parents secretly hated some of their friends, because they only ever brought the blue out with some of them. Turns out I had it entirely backwards, but such is the logic of childhood. It wasn't until many years later, when I took a gamble and joined a "gourmet club" run by a local gourmet supply shop near where I worked, that I was confronted with a platter of cheeses... and every one of them was a blue.

I had a choice - look like a snob and offend the hosts by declining, or gird my metaphorical loins and taste one of them. By pure chance, I had overheard them raving to another attendee that "...this is an experimental spicy blue... I pulled a few strings and got half a wheel..." and I thought to myself that it might be worth a try, since at that stage I was all into "spicy" foods. One nibble, and I was hooked. It's as simple as that. Since then, I have enjoyed the odd wedge of quality blue, but I admit, I am seriously fussy.

Having chanced upon this at Fieldays, and taking a taste, I knew this was going to be a great cheese, and I was so happy to get some to review. Creamy, full-bodied, rich flavour, melts in your mouth, lingers on the palate... it's everything I could ask for in a top-notch blue cheese. Knowing I had to do something more than simply eat it, for the review, I decided to try something I have wanted to do for a while, but didn't have the budget for - a salami & 3-cheese omelette using some really nice cheeses. Since I only had two quality cheeses for review - this and a delightful Havarti also by Barrys Bay - I had to use a tasty cheddar as my third cheese, but I think that actually turned out to be a great option.

The omelette turned out to be everything I could ask for, and a big part of it's success was the use of this blue - it added a much needed sweetness, richness and a tangy highlight to complement the other two cheese. I could clearly taste all three cheeses, but the blue gave it a rich depth that no other cheese could.

As another experiment - and I beg the forgiveness of any serious gourmands out there reading this - I decided to try and create a 'budget' version of an astounding pie I tried once - beef and blue cheese. Buying some basic steak and cheese pies, I carefully shaved some blue cheese on top of one, then added a slice of regular colby cheddar to act as a cover and buffer against the oven's heat. After leaving them in the little benchtop oven for 20 minutes on a moderate heat, I flipped it to grill for 10 minutes to crisp up the top cheese a little bit.

As I pulled it out of the oven, the smell had me drooling like one of Pavlov's dogs instantly. I could smell the richness of the blue, and underlying that the aroma of hot cooked beef steak chunks. I added a very tiny drizzle of hot sauce on top - because I'm going through a bit of a chilli kick at the moment - and tucked in. Amazing is an understatement. Not as good as the 'official' product of course - the quality of beef in those pies is far superior to the budget pies - but this 'student version' was more than acceptable. Rich and complex flavours, creamy cheese, beef and gravy, crisp and flaky pastry... awesome.

Overall, this is a cheese that has an amazing versatility. You can use it on crackers and bread if you like, but it's simply incredible when used as an ingredient to add depth of flavour and sweet richness to any dishes. I am already considering buying more, because I think it would make an amazing addition to a creamy risotto, a thick pumpkin soup, or as the heart of some spicy potato croquettes.

Farrah's Sprouted Grain Wraps with added ancient grains, look and taste great. The benefit of sprouted grain is that it allows the grain to be digested by the body the same way as a vegetable, ... more...