« Goosebumps: The Stories Are Real review 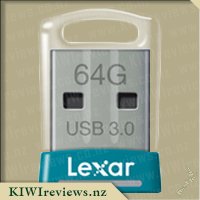 Easily expand the storage capabilities of your devices with the low-profile, plug-and-stay Lexar JumpDrive S45 USB 3.0 flash drive. Quickly and securely store and transfer photos, videos, and files at USB 3.0 speeds - up to 150MB/s read and 45MB/s write.* The drive includes advanced security software for peace of mind, and it's available in a range of colorful capacity options (16GB-128GB) to reflect your style.

Plug-and-stay storage for your favorite devices. Easily expand the storage capabilities of your laptop, TV, or car stereo system with JumpDrive S45. Its compact, low-profile design means you can plug it in and forget it - it's always at the ready for storing and accessing files.

Store and transfer content at USB 3.0 speeds. Who wants to spend extra time waiting for files to transfer? JumpDrive S45 provides speeds up to 150MB/s read and 45MB/s write.* Quickly transfer a 3GB HD video clip in less than 90 seconds, compared to more than 4 minutes using a standard USB 2.0 drive.** And for added versatility, the drive is backwards compatible with USB 2.0 devices.

Securely protect your files. JumpDrive S45 includes EncryptStick Lite software, an advanced security solution with 256-bit AES encryption to help protect your essential files against corruption, loss, and deletion. Easily create a password-protected vault that automatically encrypts data. And for peace of mind, files that are deleted from the vault are securely erased and can't be recovered.

*Up to 150MB/s read transfer, write speeds lower. Speeds based on internal testing. Actual performance may vary.
**Based on 64GB capacity. 3.2GB video, HD 1080p@30fps (46 Mbps) video.
Security safeguards, by their nature, are capable of circumvention. Lexar does not guarantee data will be 100% secure from unauthorized access, alteration, or destruction.
To ensure compatibility and best performance, please visit lexar.com/downloads

Nothing is quite as annoying as running out of storage space on your laptop or notebook... or 4GB budget-model XBox 360. Rejoice, brothers and sisters, for salvation is in the palm of your hand... if you happen to be holding one of these little puppies.

A couple of years ago, when The Warehouse did something insane and sold a bunch of 4GB X360's for $149, I snapped one up because I had a stack of X360 games I was given, and nothing to play them on. Now, I'm not much of a gamer to be honest, but I have kids and quite a few of the games were age-appropriate for my lads... and it came with a Kinect so I figured I could always get into fitness in a private arena where I didn't have to feel self-conscious. Great theory, anyway.

Anyway, roll on a year or so and multiple save-games, some free DLC bonus content, and the 4GB of onboard storage is now full. Seriously, the system simply refused to save any more game checkpoints, which upset my youngest a lot. In desperation, I started to think about what options I had - I didn't know if I could just slap in a USB hard-drive - which I would have to go out and buy anyway - and then I happened to see this sitting on my desk. "Worth a crack, Nigel..." thought I to my oneses.

Hardest thing about this plan was actually getting the drive out of its packaging. The unit clung to it's little moulded-plastic cubby like I was trying to rip it from it's dying mother's arms... but I prevailed (with the very careful application of a craft knife) and slotted it into the console's USB port. Instant success - the console stopped bleating and gave me the option to select the USB drive as the default storage, and the drive performed flawlessly.

After the youngest was in bed, I pulled the unit from the console and plugged it into the USB 3 port on the PC, so I could a) see if the XBox had formatted the drive, and b) what sort of read/write speeds I could get. Addressing my forst question - nope. Thankfully the X360 had not created some strange platform-specific formatting - in fact I was able to browse the save-game data (a bunch of files that contained a mash of hexadecimal gibberish unrecognisable to me) on the PC quite easily - giving me hope that if I do get that tasty little 2TB HDD I have my eye on as expanded console storage, I can migrate the save data easily.

Addressing the second question, I had to spend half an hour doing a multitude of read/write tests using a USB 2.0 pendrive as a benchmark to ensure I actually did have a solid USB 3.0 'channel' operating. After the tests - reading and writing a single 10GB file, 20GB of small text-only files, 20GB of a mix of text and image files, and finally a 2GB video montage - I found that I could get a decent, steady write-speed of 39-41MB/sec - which is pretty good for real-world non-lab conditions - and an average read speed of 106MB/sec - only 71% of the maximum stated. I put this down entirely to 'other background tasks' slowing the test system down. Unfortunately, Windows is a pig about some things, and refused to let me disable the tasks, so I chose to leave it at this as more of a 'real-world' scenario.

The drive comes with a complimentary install of SecureStick Lite - a basic drive-encryption tool that allows you to password-protect the data you write to this drive. I gave this a run-through and found it to be a very useful bit of free kit. You do need to keep in mind however that this *is* a "lite" version, and you do get prompted to upgrade to the "full" version with a heavy Lexar-sponsored discount applied. I won't go into the details of the software, as it is not a Lexar product and not actually the product under consideration for this review - however, I did like it being a pre-installed part of your purchase.

Overall, this is a great little device, and I point out the "little" - it's the same size as a typical USB dongle device - such as a plug-in transceiver for Bluetooth or wireless mouse/keyboard. My only concern is that there are similar, competing devices on the market that offer the same capacity and speeds, but for around half the price of this unit. I failed to find anything obvious that would warrant this price point, so I can't really say it's good value for money based on the data I was able to collect. That said, there are also many devices out there at a similar price-point that offer you far less than this unit does... so it's "better than average" rather than "leading the pack" in any way.