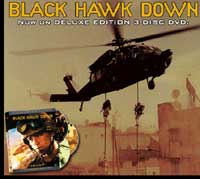 Black Hawk Down stars an exceptional cast including Josh Hartnett (Pearl Harbor), Ewan McGregor (Moulin Rouge!), Tom Sizemore (Saving Private Ryan), Eric Bana (Chopper), William Fichtner (The Perfect Storm), Ewen Bremner (Snatch) and Sam Shepard (All The Pretty Horses). In 1993, an elite group of American Rangers and Delta Force soldiers are sent to Somalia on a critical mission to capture a violent warlord whose corrupt regime has lead to the starvation of hundreds of thousands of Somalis. When the mission goes terribly wrong, the men find themselves outnumbered and literally fighting for their lives

Another American-made film that shows Americans jumping into African "terror" bases, guns blaring and saving the world from itself. How exciting. Well, in all reality, it did actually prove to be an enjoyable watch. I'm not usually a fan of the war movies as they show troops running into dangerous situations, and coming out unscathed.

These kind of movies tend to over-glorify war and 'trick' youths into joining the armed forces with the expectation of easily becoming war heroes. But this film goes beyond the usual facade, and creates a far more realistic idea of how wars occur.

Following a unit of soldiers that are dropped behind enemy lines, they are forced to take on an enemy that has a lot of knowledge of the environment, are already heavily fortified, and have control of the area. This film has a more realistic interpretation of casualties and leaves me unsure of the outcome during the film.

Not knowing whether this would become a tragedy, or an "against-all-odds" success story, I became far more engaged in the film. This was an action packed movie from start to finish, and kept me on the edge of my seat, right to the very end.

WOW! Honestly when I heard about this movie I thought "Here We Go Again, Another Hyper-Fiction War Movie" but this was... Awesome.
Seeing this movie on my mate's Projector Screen, and with complete surround sound, just made this the ultimate cinematic experience. But it is just as good on a small TV with one speaker.
This movie harnesses the ultimate battle scenes with realistic battle sounds, not some foley-artist-half-pie job.
This movie harnesses most of the facts, and points in MARK BOWDEN's book of the same title, down to the smallest detail of an arguement between a "Ranger" Captain and one of the "D-Boys" (Delta Force [US Special Operations] Operators) about the safety of a rifle.
The use of the real weapons, and helicopters, "Made" the movie what it is, instead of using computer enhancing, and the added effect of 'Shooting" on-location instead of "Green-Screening" or Superimposing really helped bring the movie to reality.
Overall, a highly reccomended film, and I would see it again without hesitation.

In the dungeons of the castle of the evil Queen-sorceress Bavmorda, a prisoner gives birth to a child who, according to an ancient prophecy, will put an end to the reign of the Queen. A midwife saves the child from the wrath of Bavmorda, but is forced to throw her cradle in a river when reached by the Hounds of the Queen.

The river brings the child near a village of dwarves, and the little Willow adopts her. When the Hounds reach the ... more...