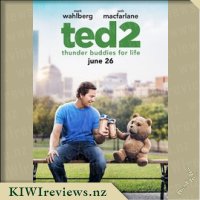 Problems arise when the couple decide to adopt a child, and the law declares that Ted to be property and not a person. Angry and dejected, the lovably foul-mouthed teddy bear must now seek legal help from a young lawyer (Amanda Seyfried) and a legendary, civil-rights attorney (Morgan Freeman) to get the justice he deserves.

If you are easily offended by Sex, Drugs, Swearing, Sperm, Drugs and did I mention Drugs? - then stay away from this movie. Although it does have some laugh out loud moments there are (as expected) a lot of gross, face palm and damn right silly moments. I don't really remember the first movie just that the teddy bear came alive so before we sat down to watch my husband had to give me the recap of the first one, it was pretty easy to figure out John was going to be divorced as Mila Kunis did not appear in this movie.

From the previews this did look good and I am such a sucker for Mark Wahlbergs voice. In saying that I did enjoy aspects of this movie but the drug taking was definitely over done. The sperm bank scene was disgusting but you couldn't help but laugh in a gross sort of way and the movie also renewed my desire to go to Comic-Con, it seriously looks so cool, especially if a teddy bear is running around loose. I did find Ted rather cute and the special effects on him where awesome, especially when he would run reminded me of Alf.

The story itself is silly. A teddy bear gets married and then decides in order to save the marriage they need to have a kid as that is the reason everyone has kids. There lies the problem as he is a toy and finds out he had slipped thru the cracks and was not actually a legal resident of America and therefore not a person so the wedding does not exist. Bring on a court case and that is the movie in a nut shell. Throw in a lot of swear words, half a movie about taking drugs and a few cameos and one hour and fifty five minutes later you can have your life back.

Actually, to begin with it had a lot of cameos and I commented 'oh it is a cameo movie' but then it just stopped. Its like they used everyone up in the first couple of minutes and then nothing. Extremely weird. Seth MacFarlane does a great Ted voice and brings his usual humour into the play. Not a bad movie but definitely not a great movie and you will feel a lot dumber after sitting through this.

Score: 9.0
Product reviews for listing 8416: Ride Like A Girl
Directed by Rachel Griffiths

Biopic on Michelle Payne, the first female jockey to win the Melbourne Cup. Stars Teresa Palmer and Sam Neill. This is the feature directorial debut from actress Rachel Griffiths.