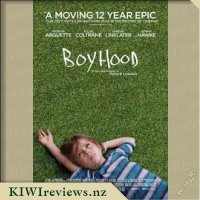 The joys and pitfalls of growing up are seen through the eyes of a child named Mason (Ellar Coltrane), his parents (Patricia Arquette, Ethan Hawke) and his sister (Lorelei Linklater).

Vignettes, filmed with the same cast over the course of 12 years, capture family meals, road trips, birthday parties, graduations and other important milestones.

I am going to be honest this will not appeal to everyone as literally nothing happens. But, it is still absolutely fascinating to watch the same cast age for twelve years. The physical and mental changes as they age are so visible and you are just drawn into the drama of it all. Basically its just small windows of Masons life as he goes from a small boy into the years of adult hood. It is just so real and watchable. Its just every day life where nothing special ever happens but it is what we all face from day to day.

I don't know if its my own issue or if its a society thing but basically in every scene I expected the worst to happen - a death, a car accident, molestation just something and I was always prepared for some doom and I am not sure how to feel about that. I guess I am so used to watching horrible things on television that it has become part of everyday entertainment for me and that is really disturbing when you think about it. I can watch fairy tales where I know everyone lives happily ever after or watch Criminal Minds which digs deep into psychos minds but to sit and watch an every day occurance play out on the screen was rather a shock to the system. At the end I turned the television off and reflected on my own views and feelings and it is scary to what I have come to accept as normal.

Another thing which really moved me is near the end Ethan was taking pictures of everyday objects like a fire hydrant and that he captured in a picture and it was stunning. It just goes to show there is beauty in everything you just need to be willing to see it. The scenery and camera shots where beautiful especially when they visited the big city and just watching the sky changing colours it had so much beauty in itself.

The acting and the script were not fantastic and at times it was pretty average, but it still had this spell cast over me where I could not turn away and I needed to know what would happen next. For just under three hours it does not seem that long. An amazing movie.

When a Chinese criminal mastermind flees to Paris, there's only one culture-clashed, crime-fighting duo for the job.

Ready to raise hell in the city of lights, Chief Inspector Lee and Detective Carter instead get caught in an explosive battle between the French police, the Triad gang and two gorgeous femmes fatales!

With everybody kung fu fighting to the top of the Eiffel Tower, this one-two-punch of hilarious action doesn't let up until the final heart-stopping au revoir!