« Star of Deltora #3: The Towers of Illica review

Mark of the Thief #2: Rise of the Wolf review

ProdID: 7028 - Mark of the Thief
Written by: Jennifer A Nielsen 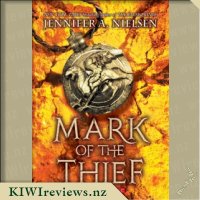 Mark of the Thief product reviews

When Nic, a slave in the mines outside Rome, is forced to enter a sealed cavern containing the lost treasures of Julius Caesar, he finds much more than gold and gemstones. He discovers an ancient bulla, an amulet that belonged to the great Caesar and is filled with a magic once reserved for the Gods - magic some Romans would kill for. Nic must harness the magic within himself and defeat the empire's most powerful and savage leaders

I know I am not meant to make comparisons to other products, but if you are a fan of Wilbur Smith's Egyptian series ('River God", 'The Seventh Scroll", "Warlock", "The Quest", and "Desert God"), then you will very much enjoy this series. Set in the era of the Roman Empire, this book grounds itself in a lot of Roman history, and that of the Roman gods that were worshipped, placing a more literal translation to the powers that they held. This brings the series into the religious/fantasy/supernatural genre.

This book is well written for the younger readers (compared to Wilbur Smith who writes rather explicitly for adult readers). The themes within the book revolve a lot around self sacrifice, family bonds, and the concept of freedom and social classes.

I found that it flowed well, and the storyline was always moving, and accelerating. It did make it a little harder to empathise with the character, as you constantly try to determine your own actions if put into that predicament; there are no lulls in the plot however, which mean your character is just moved from one uncompromising situation into the next. No real opportunity to rally. But this was certainly a fresh plot idea, and came with enough twists to keep my interest. It covered the topics of Greek and Roman mythology, slavery, elected officials and hierarchies, and social class differences; all of which play a significant part in how the story roles out.

Despite being aimed at the young adult audience, I still found it engaging at my older age, and I started reading the second instalment immediately afterwards. Definitely worth a read.

From the very first page, I was completely hooked in by this story. It begins with an exciting event (Sal bullying Nic to do what he is demanding) and the pace never lets up, not for a single second. I read the book from start to finish without stopping once - I simply could not put it down. It has all the ingredients of a first-rate thriller with the added bonuses of historical fact mixed with fantasy. A warning - if you start reading, make sure you have some time to spare as, like me, you may not be able to stop.

The fantasy element is grounded in Greek and Roman mythology - the griffin, Diana the huntress, Venus, supernatural powers, and magical artefacts. The factual element, however, is the geographical and political scene which forms the background to the story. The cloacae, gladiators, imperial system, praetores, slaves, and of course Julius Caesar himself, were all very real and have been documented throughout history by many different writers.

Despite the setting in the ancient world, the characters are very modern in their thinking and in their relationships with one another. Peer friendships were just as important as they are now: Nic's friendship with Aurelia is born of necessity and mutual support as they begin by hating each other! Relationships with animals are just as important - Nic is horrified by the ill-treatment of the animals who are destined to fight in the amphitheatre and are being deliberately starved so that they will become more vicious. As for his friendship with Caela the griffin, this is similar to the process by which a modern wrangler will calm a wild horse to the extent that it can work with humans.

There is a back story about the importance of family and belonging. The book is set in the days of slavery, a time when family links were discounted by those in power as they separated parents from their children, siblings from one another, in order to trade them to the highest bidder as though they were cattle. The practice of exposing (leaving a baby in the street so that someone else might find and adopt it) is also explored - something that people today might find very hard to understand. Finding their lost families is a major concern for both Nic and Aurelia as they are both very much alone in the world.

This is a book that holds appeal for a wide range of people. It is recommended for young adults, but I don't think you can put an age limit on it - it would be equally suitable for older people who enjoy good fiction; a younger child with advanced reading skills would enjoy it equally. The mark of a classic is that it can be read and enjoyed by people of any age, so I think this is destined to take its place alongside those select books. Now I can't wait to read the second book in the series!

Suitable for children aged 5-10, this book contains 100 stickers and activities. Children will have hours of fun solving the puzzles, matching the shapes, and decorating the pages.

The back cover includes a cut-out Star-Lord mask which children can cut out to put on their wall or wear (with elastic added to keep it in place).