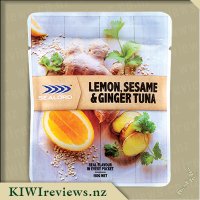 What makes our tuna pockets taste so good? It's the fusion of real ingredients. So you get to enjoy the taste of Asia with Tuna, lemon, ginger and sesame. All gently slow cooked to lock in the flavour.

Our family of five are regular eaters of tuna - in a variety of ways. My personal favourite is to add lemon and pepper to tuna on a cracker, so when requesting this Lemon, Sesame and Ginger Sealord Tuna - I definitely knew what I wanted to try first.... however - my chef-like husband decided that was a waste of delicious sounding flavoured tuna, and quickly snatched it from my grasp, and turned it into amazing homemade sushi - seriously - it was a...m...a....z....i...n...g!

Before going into the in's and out's of the flavour and my view - a little about the product, packaging and ingredients. The packet is a a vacuum sealed pouch - keeping all the flavours and goodness in. It is attractive, with lovely pictures of lemon, sesame and ginger - making it very easy to distinguish between the different flavours. The ingredients list is clear and states the allergy potential of the ingredients. Opening the packet is simple - tear it open. We used a teaspoon to get every drop out - but squeezing it would work just as well. Because the pack is light - you can simply roll it up and pop into the rubbish - great when at work or out and about.

All in all this little tuna pockets was delicious, convenient and very flavourful. The downfall is the price - being quite steep compared to the canned versions of tuna. I do want to try the other flavours however, and probably see these pockets as "treat tuna'' rather than ''staple item always in the cupboard'.

My usual method of using pre-schgredded tuna is to mix it through a packet of 2-minute rice or some noodles to give an otherwise bland 'bulking ingredient' a much more appealing taste. This product begged to be used in a more respectful way, so I decided to get creative.

Digging through the pantry I found a packet of rice-paper squares I had bought a little while ago, and decided to make rice-paper rolls. Now, I am the first to admit I have no idea exactly how to make them, and my experiment looked somewhat less than appealing, to be polite about it, but it tasted pretty darned good.

Soaking the rice paper in water to soften it, I prepared my fillings: finely grated carrot, finely strings celery, capsicum, some avocado, a little finely grated onion, and some mung bean sprouts for a mild nutty note. Oh, and of course the tuna. I laid them out as though I was about to make a mini burrito, and the first one was a disaster. It took me three delicious failures before I found the right amount of fillings and the right way to fold them - diagonally, as it turns out - and in no time at all I had whipped up about 6 or 7 ugly but very tasty little rolls.

I was tempted to look at a dipping sauce, and even tried a couple of variations on soy-and-something... but in the end, just as-they-were turned out to be the nicest. I have since bought another pack of the rice paper - a larger pack with more sheets - and I plan to experiment on folding techniques until I find something that works well, allows for a good sized filling, and looks appealing after it's all over.

Overall, I found this tuna to be a great Asian-style filling and have bought more packets since I first tried it. While I could easily taste the ginger, the lemon and sesame were barely registering for me... but then my palate is not that sensitive due to years of chilli-abuse in my university days. Frankly, while it is great as a rice-topper, it's far more versatile than that and I encourage you to experiment with it.

Trying for the first time, I don't think I am a fan of the tear open bags, but once into the bag it was fine. I used a knife to get the tuna out onto my cracker. I found this flavour really yummy. I loved the flavour of the ginger and lemon, I found it was a little bit oily though but overal the taste was amazing. I had the tuna on cruskit crackers which the plain flavour from the crackers and the powerful yum flavour of the tuna worked so well together.

I think this flavour would also go nice with a salad or in a bun. I think for me this would be a flavour I would buy again, and the amount you get is great. I managed to spread Tuna over 5 crackers which was a great amount I thought for the size of the pouch of tuna.

For the price I'm not sure $2.60 is an amount I would feel comfortable paying, when you can buy the cans for half that and get what I think would be the same amount. But all in all, great flavour and taste and something yum for a treat, I'm sure my son would enjoy it as well, as its not spicey or hot.

If I see this on the shelf in future in a can, I will be putting it into my trolley. Thanks for the sample to review.

Let's get one thing clear - I have never liked tuna. It is too solid, too lacking in flavour, and a non-starter in the fish-of the-week stakes. Merely a substitute for tinned sardines or salmon when there is nothing else available. Right?

No way! And I was in effect more than happy to be proved wrong on this occasion. A friend had recommended that I try the new Sealord tuna pouches as they would change my mind completely, and she was right. What a difference this combination makes to the tuna experience. For the first time ever, I enjoyed eating tuna - and so did the three other adults who were with me.

It was tasty. The tuna flakes were mashed up so that the "chunky" texture which I don't really enjoy was not an issue. It was much more delicate and certainly fitted better my idea of what fish should be. The lemon flavour was quite strong, counteracting the richness of the fish and making it much more palatable. The ginger and sesame flavours were much more subtle; while they were there and could certainly be tasted, they were not intrusive and worked as a flavour enhancer rather than taking over completely. One of my friends commented that she thought there could be a little more ginger, but the rest of us thought it was fine just the way it was.

We tried it as part of a dish of hors d'oeuvres, served with different breads, and found that it went particularly well with the emmentaler slices and the beetroot and mint dip. The flavours worked well together and by the end of the meal the plate had been cleared, right down to one person dipping her bread in the remains of the juice from the tuna so as to be sure to use up every last drop. We also tried it as part of a salad sandwich and this was equally tasty.

All four of us will definitely be looking out for it on the supermarket shelves. One person commented that it would be a convenient item to take on a picnic - easy to carry and needing no refrigeration or special containers to transport it. Well done, Sealord - you have taken tuna to a whole new level!

In the past I haven't considered tuna to be one of my favourite meats, I mean it works well on sandwiches as well as being mixed with mayonnaise and a bit of onion to make a dip, but it hasn't been anything to make a big woop about. However, The main reason I found tuna a bit mundane was because I never really experimented with how well it works with other flavours, so this was a great new experience for me.

Out of the 3 flavours I tried, this was the first, and I think I made the right decision to pick this over the others. I found that the flavour of this mix was really well balanced, the lemon added a bit of sweetness and a nice tartness. The ginger also gave a bit of tang, but it did so while toning down the flavour of the lemon (plus, lemon goes well with fish, we're Kiwis, we know this best!

The sesame seeds were a nice addition. Normally I find seeds in foods like this to add a rather unpleasant texture and/or flavour, but in this instance the seeds were so small that they didn't affect texture in any detectable way, and they provided a mild, savoury flavour enhancement which made things work REALLY well. The Tuna itself was well prepared, it had a good amount of moisture while not having a "dry" texture, and it was cooked well too, so I was able to have this stuff cold on a sandwich with no problems.

Another bonus was that even though this Tuna came with additional flavours, it went REALLY well with some Aioli and cheese, so it would appear that anything which goes well with Tuna will go well with this. Overall, I think that this product is of a fine quality, it has a great flavour, and I was quite content with it. I would highly recommend to all those Tuna-loving people out there, and I may even recommend it to those who aren't a big fan of it as well, this stuff may change your mind.