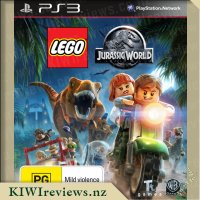 Reimagined in LEGO form and told in TT Games' signature classic LEGO humour, the thrilling adventure recreates unforgettable scenes and action sequences from the films, allowing fans to play through key moments and giving them the opportunity to fully explore the expansive grounds of Isla Nublar and Isla Sorna.

So far there has only been one console based LEGO game that I haven't enjoyed and they only seem to be getting better, so naturally, I wanted to get this when it came out, though due to finances it wasn't until Christmas that I managed to splurge and buy a copy. My son is dino mad and I knew this would be the perfect way to introduce him to this world. In the game you follow the events of all four movies, so if can't bear the thought of spoilers, avoid playing it till you've seen it. Each film gets six levels and you can expect the usual humor that comes with these games.

There is a huge amount to do in this game, so even when you've played through story mode, you can still spend a few hours playing. With each movie that you travel to there are red bricks, people in peril, gold bricks, bonus levels and sick dinosaurs that you need to heal. Add to this the typical free play mode in which you try to get survivor mode, full minikits, person in peril and a dinosaur to unlock, it's a fun way to pass the hours. This was the first LEGO game my son had a real good go at and there was enough there to challenge him and when I needed to go and do stuff, he was able to continue playing well on his own, 95% of the time.

Another good addition to the LEGO series and perfect for the family.

Engage in this saga set in the Golden Age of the Republic - over 4,000 years before the first Star Wars film, when both Jedi and Sith number in the thousands. With the Galaxy reeling from a recent conflict with the Dark Lords, the ongoing battle between the Jedi and the Sith rages on. Your actions determine the outcome of this colossal galactic war - and your destiny as a ... more...