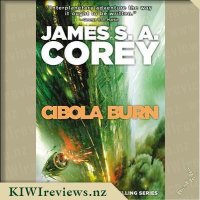 Disclosure StatementFULL DISCLOSURE: A number of units of this product have, at some time, been supplied to KIWIreviews by the company for the purposes of unbiased, independent reviews. No fee was accepted by KIWIreviews or the reviewers themselves - these are genuine, unpaid consumer reviews.
Available:
May 2015

The gates have opened the way to a thousand new worlds and the rush to colonize has begun. Settlers looking for a new life stream out from humanity's home planets. Ilus, the first human colony on this vast new frontier, is being born in blood and fire. Independent settlers stand against the overwhelming power of a corporate colony ship with only their determination, courage, and the skills learned in the long wars of home.

Innocent scientists are slaughtered as they try to survey a new and alien world. The struggle on Ilus threatens to spread all the way back to Earth. James Holden and the crew of his one small ship are sent to make peace in the midst of war and sense in the midst of chaos. But the more he looks at it, the more Holden thinks the mission was meant to fail. And the whispers of a dead man remind him that the great galactic civilization that once stood on this land is gone. And that "something" killed it.

The ring is open, the Command Centre is pacified, Holden is now an official Ambassador of Peace and Mediator in a civil war between Belter colonists who got to the planet Ilus first, and the Corporate heavies who want it for themselves because of the huge deposits of Lithium found there. Tagging along with Holden's crew is the "ghost" of Miller of course, in his quest as "Finder of Lost Things" for the semi-autonomous remainder of the Ringbuilder Tech that built the Earth Ring.

This book was actually a slight let-down for me, as it focussed more on the stupidity and violent ignorance of the two sides of the human conflict, and almost no focus on the far-more-interesting-to-me alien tech behind the Rings... and whatever it was that killed off that civilisation. The Expanse series drew me in with three books about this insanely cool, galaxy-spanning, massively superpowered biotech civilisation, and threw up a pointless human drama that could have been resolved in 20-30 pages if just one human had been able to put aside his needless aggression and settle things down.

Still, the planet's RingTech was brought back into the fold near the end, and the Miller Ghost-emulation that runs in Holden's head does finally expound some more back-story about that civilisation... but man that guy has a knack for self-sacrifice and suicide. Even when he's dead. You just have to admire the depth of the guy's nihilism that even as a shadow-puppet of his former self, he's still capable of giving it all up to save the day. And we get a good glimpse of what is was/is that ate the Ring Builder civilisation.

Overall, while not even close to my favourite of the series so far, this is still a good book and even tangentally, it does belong in the saga.

What is the secret of the clouds?

The Thea Sisters have received an urgent message from their friend Will Mystery. The magical Land of Clouds is in danger. The mouselets must find out why the clouds are disappearing!

Once they enter the kingdom through Mount Everest, the mice meet fairies, elves, and unicorns on their way to the majestic Cloud Castle. But who can the Thea Sisters count on to help solve the mystery? It's an incredible journey to restore harmony to this enchanted land!