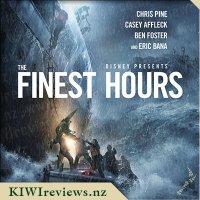 Disclosure StatementFULL DISCLOSURE: A number of units of this product have, at some time, been supplied to KIWIreviews by the company for the purposes of unbiased, independent reviews. No fee was accepted by KIWIreviews or the reviewers themselves - these are genuine, unpaid consumer reviews.
Available:
in cinemas from Feb 4th 2016

The Coast Guard makes a daring rescue attempt off the coast of Cape Cod after a pair of oil tankers are destroyed during a blizzard in 1952.

Historical dramas are something I really enjoy. Throw in a good disaster and it is bound to grab me! Before I went to the movie, The Finest Hours, I saw a clip online and that clip initially didn't actually sell it to me at all. Luckily I had a look for the official trailer and I got a lot more excited about the idea of seeing the movie.

The movie began with a bit of old fashioned romance and everything was nice and slow. It gave us a taste of real life in the early 1950s. I enjoyed the set and costumes which were recreated for this part of the movie.

Once the movie really got going, it became rather dramatic. The music and sound effects enhanced the mood and drama of the experience. There were lots of closeups of faces which captured emotion and made us feel what the characters were experiencing. The fact that we were watching the movie in 3D meant that it seemed even more real. The waves seemed to pop out of the screen and as the rescue boat was going through the waves it made me like I was being thrown around by the waves myself. During the rescue scenes, I felt my body moving on the seat as the boat moved around in the ocean and I had to brace myself. My heart was throbbing too. I love a movie that has me on the edge of my seat concerned about the success of a mission!

The actual storyline was simple and included some romance, a rescue at sea and the heroes involved. It showed us that heroes are everyday people who step up in to help others even when they are not the most confident person around. Although it was a simple story, it was a drama based on historical fact and it probably couldn't have given us any further facets to the plot. There were two main heroes in the story, Bernie Webber and Raymond Sybert. Raymond did an amazing job saving his crew and I think that this was forgotten in the movie as soon as Bernie took over the command in the rescue. I would have liked to see him given a bit more credit - perhaps that was how it was in real life.

Overall, although it was a simple plot, I thoroughly enjoyed the movie and came home feeling a sense of satisfaction about having experienced such an amazing rescue with much more basic equipment than we have available to us today. After some time to think about it, this struck me as a movie that had a lot of potential and in real life must have taken many, many hours to happen... but with most of that time spent fighting waves again and again, or putting along in near-pitch blackness hoping to stumble across their target... the movie was really going to struggle to keep the audience's attention. And it did.

The important parts of the plot were few and far between, and some of the personal relationship of the main character had to be drawn out a bit in order to build tension and sympathy. After all, no-one expects to sign up to the Coast Guard and expect it to be like an episode of Baywatch on loop-play... so occasionally having to put your life on the line in the name of saving others is part of the job. While it's easy to respect that, it's hard to sympathise with someone for doing the job they volunteered for. However, what made this particular rescue remarkable was the ferocity of the weather, the fact that the rescue boat was rated woefully short of the needs of the situation - designed to carry a maximum of 12 people including the crew - and the bravery of the main character.

All of that said and accepted... for me, the REAL hero of the movie was the ship's chief engineer from the oil tanker Pendleton, one Raymond Sybert played by Casey Affleck. This man single-handedly saved the 33 survivors of the Pendleton in the face of aggressive resistance by some hot-heads on the crew who thought him a bit of an odd-duck and not to be trusted in a crisis. Yet, he managed to not only keep the aft section of the ship afloat, but also rig an emergency steering system so he could drive the half-ship up onto a shoal near Chatham, in order to give any potential rescuers time to find them before they joined the rest of their crew at the bottom of the freezing waters.

Raymond lost only a single crewman, and that was during the actual rescue operation and was caused by the storm throwing off the timing of his jump to safety. The movie, naturally, made it all about the storm and fudged over some of the less pleasant facts surrounding his loss.

I was actually a little disappointed that the movie pointed out how the authorities made a big deal over the Coast Guard crew - who did in fact do an amazing job, to be fair - but utterly neglected to highlight Raymond's heroism in the face of impossible odds.

A few other little things took the shine off what is undoubtedly a good movie, and they all boil down to the usual Hollywood practice of taking actual facts, rewriting them for what they hope will be maximum impact, slapping "Based on a true story" under the movie's tag-line to avoid litigation, and passing it off as 'the real story'. Even a cursory search for images relating to this heroic rescue will show you that the weather can not have been quite as bad as the movie made out - photos from the night clearly show the rescue boat returned to dock with it's flimsy fold-up canvas cabin still intact and undamaged, yet the movie has that being violently ripped away within moments of the first big wave hitting. Strangely too, the photos show no more than 6 men visible on the boat as it pulls into dock after the rescue, yet all accounts tell how 36 men came home - 32 survivors from the Pendleton and the four rescue crew.

Overall, I did actually like the movie myself. I followed my own rules and avoided researching the real story until afterwards - so I didn't spend the entire movie groaning quietly at the copious 'artistic licence' being slathered all over the truth - and that allowed me to just sit back and enjoy what is a mildly dramatic movie. Yes, sorry... mildly. There may have been a heck of a lot of tension in the real event, but it failed to transform the movie into something gripping. Enjoyable, captivating, but nothing mind-blowing after the fact. Full respects to the Pendleton survivors and the four brave lads who performed a stunning rescue, but the movie did them no real justice. They would have done better to have stuck closer to the truth, especially in the case of how they lost poor "Tiny" from the Pendleton.

What's a yuppie ghost couple to do when they're quaint New England home is overrun by trendy New Yorkers? They hire a freelance bioexorcist to spook the intruders. And everyone gets more than he, she or it bargained for! Michael Keaton stars as Beetlejuice. He's a juggernaut of jokes, jolts and jive who hurls oneliners, spins into grotesque forms, gobbles insects and can't leave ladies living or dead alone. Alec Baldwin, Geena Davis and Winona Ryder share starring honours. Say the B word three times and have a wonderful DayO!