ProdID: 6929 - Demonic
Directed by Will Canon 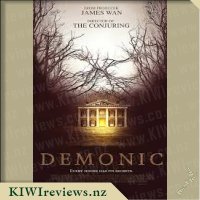 When Detective Mark Lewis (Frank Grillo) is called to a local house, he finds the bodies of three slaughtered college students. The only survivor, John (Dustin Milligan) claims they held a seance to summon ghosts of people killed in the house years earlier. Now, three of his friends are dead and two are missing - including his pregnant girlfriend. Teaming up with criminal psychologist Dr Elizabeth Klein (Maria Bello), Det. Lewis investigates the videotapes discovered at the scene to try and uncover what really happened that night. What they find is more terrifying than they could have imagined.

The film industry is rather saturated with horror films, and with many iconic plots in recent history, and many "necessary elements" in the genre, it is becoming increasingly difficult to come up with original ideas. And that is what becomes increasingly apparent throughout this film. Demonic brings a more direct approach to the 'Paranormal Activity' style of film through the combination of "recorded footage" and current time character interaction, where you join the storyline in the middle, attempt to discover the past while the storyline continues to progress towards the climax.

When I read the blurb, it sounded hilariously horrible. Almost B-movie material, but upon watching, you could tell that time had gone into the production of this film, so we ended up with a well made movie, but a bad plot. It started off reasonably well, but soon fell into the trap of repeating the storyline of nearly every over demon movie ever released. The ending was not entirely predictable; if only because the plot had become so convoluted that the story was impossible to follow.

But I enjoyed the middle of the story. If the recorded backstory had actually been the full story, then I would have enjoyed this film much more. The use of imagery, dreams, and technology gave a variety of options to view and perceive the threats throughout the film, but it was underplayed. Outside of use of recorded footage in the film, nothing provided a scare. No shocks, no thrills, no suspense.

Demonic overreached. In attempting to create a link between ghosts and demons, and bringing demons into the Paranormal Activity style of film, the plot became convoluted, complicated, and ultimately made no sense to the viewers. This film did not do much correctly. With so much backstory within the backstory (very meta), and so little going on with the main storyline, the main characters become redundant and unnecessary.

There were a few parts in the middle that did give me a satisfying shock, and I would have loved to have seen a lot more of the "after the seance" stuff, but as it is, this film lacked suspense and tension, and there isn't enough to justify sitting through the film again

The very British sensibilities of Jane Austen are introduced to the exotic flavors of the Bollywood musical in this romantic comedy with songs from the director of Bend It Like Beckham, Gurinder Chadha.

Lalita Bakshi is the lovely and eligible daughter of her socially ambitious mother and father. Mother and father want to be sure that Lalita, the most beautiful of their four daughters, settles down with a man worthy of her, but she has proven resistant to matchmaking, announcing that she will choose her own husband, and will choose him for love.