The House on the Hill review 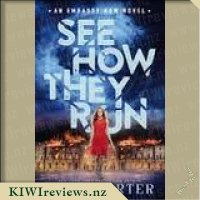 Disclosure StatementFULL DISCLOSURE: A number of units of this product have, at some time, been supplied to KIWIreviews by the company for the purposes of unbiased, independent reviews. No fee was accepted by KIWIreviews or the reviewers themselves - these are genuine, unpaid consumer reviews.
Available:
February 2016

See How They Run product reviews

The only way to put the past to rest is for Grace to kill it once and for all. On Embassy Row, power can make you a victor or a victim, love can turn you into a fool or a fugitive, and family can lead you forward or bury you deep. Trust is a luxury. Death is a very real threat. And a girl like Grace must be very careful about which secrets she brings to light.

The Mystique Trilogy : 2 : The Dragon Queens

I read the first book in this trilogy a year ago now, so while the knowledge and backstory are in my head, they were pretty deep in my long term memory. So I was curious to see how quickly it would all come back to me, or whether it would even need to; I had no idea whether it would involve all the same characters, or whether focus would switch to someone else, or a different environment altogether.

But this second installment follows closely behind the first. The characters carry on into the new story, and it brings up the major plot points of the previous story many times, so beyond a few moments of confusion as to the purpose of certain characters, you quickly come to terms with their friendships, dependencies, alliances, and frames of mind.

This story line follows along similar lines of the previous one, with a lot of major events revolving around the stability (or instability) of the protagonist. This second story delves deeper into the original mystery and the societies behind history of Adria. A quick easy read, you find yourself questioning your loyalties at several stages of the book a you get further information, and despite the quick acceleration of events, the story line has a slow pace; Lots of time for contemplation, and mystery solving in amongst the action. Several parts of the story seem predictable to begin with, but assumptions are quickly cast away.

My one gripe about the book (apart from wishing it was longer), was the ending. The story had no real summary or conclusion, and while it will create a lot of suspense going into the third installment, I still feel that this story arc needed some kind of finish, something to leave me satisfied while I wait another year to read the gripping conclusion.

Price-wise it's not too bad. The quality of the hardcover book is very good, but I read through the entire thing in a few hours, so it was a little short for my liking. Will I read it again? Perhaps when the 3rd installment comes out, Just to be able to get the whole story together.

I have not read the first book in this series of three, so I was wondering whether I would be able to read this one (the second) as a standalone. I need not have worried. There are references back to the first book ("All Fall Down") but it did not affect my understanding of this one. And, by the end of the book. although the story is complete in itself, I could see that it would certainly lend itself to another sequel.

The first thing that struck me about this book was the packaging. It has a hard cover, unlike most books these days, and when I picked it up I was impressed that it felt and smelled like a "real" book. The double end papers were blank and an attractive shade of blue rather than the white usually featured (if indeed there are end papers at all). Despite the upmarket presentation, the cost of the book was around the same price that I would expect to pay for a paperback of similar length.

The concept for the story is interesting. It centres on a group of young people in a country (Adria) which does not actually exist, although it would appear to be somewhere in the Mediterranean area of Europe. I would guess from the placenames used, which are similar to names of real places in countries like Spain, Italy, and Greece, that the author might have imagined it to be somewhere there. The main characters, including the narrator (Grace), are all members of families that have been posted as ambassadors to Adria by their various countries of origin.

While the storyline is intriguing to the point of being sometimes far-fetched, I did find the pace a little slow at times. Possibly this is because I expect more action and a bit less analysis from a novel which is marketed as a thriller for young adults. I found myself wondering if it might have been faster moving if the story had been written in the third person rather than with Grace as the narrator.

On the plus side, I enjoyed the way the pace picked up in the second half of the book when exciting things started happening. The ending was fascinating and certainly made me want to get the third book in the series when it comes out. It would appeal to teenagers who like an imaginative read, and enjoy the way the strands of the story weave reality and historical fiction into one slightly improbable mix.

When priceless violins are stolen, SHINE suspects evil agency SHADOW is orchestrating something big. But how did the thief just walk out without anyone stopping her? Special Agent EJ12 and the STAR team must work in concert to find out. That's the easy part. As EJ12, Emma Jacks can do anything. So why does she find doing her school passion project so hard? Perhaps she doesn't after all.