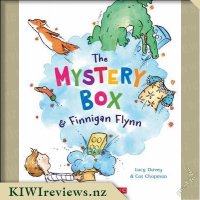 What would you do if a box turned up on your doorstep? Open it, of course! And that's just what Finnigan Flynn does ... and unleashes a horde of objects, from toe-nibbling crocs to fabulous frocks!

The State of Africa - A History of Fifty Years of Independence
Rating: 8.8

Mr Three loved this book! It is full of bright colours and cute animals, and every time we turned a page he dissolved into chuckles. We read it through three times in a row and by the third time he was starting to join in with the last word in every second line. I love books like this as they help little ones to remember the story and also help develop their sense of rhyme and rhythm. He adored the croc-repel socks and asked if he could have a pair too so his feet would be safe. I explained that there are not too many crocodiles in the South Island of New Zealand, but if he came to visit me in the North Island we might need to get him a pair. For some reason he thought I was joking!

Some of the words like "stomp-romped" and "bam-boomed" were such fun to say that we had to keep stopping to repeat them. He also enjoyed saying "Uh-oh" at the end of each section, and repeating it every time something new happened. Even if it was not part of that particular section of the story!

In some ways, this book reminded me of the Doctor Seuss style of writing. The pictures, too, featured the same bold colours even though the actual style was different. But the nonsense rhymes, the impossible situations, the creative ending which saw the box duly passed on to another unsuspecting recipient, were all sheer Seuss. I was about to put the book away, feeling rather exhausted after three energetic readings, when Mr Four burst in. He had just come home from an outing and wanted to see what his brother was reading. I resigned myself to another three times round the Mystery Box - I knew he would find it just as much fun as his little brother had!

When this book arrived in the KIWIreviews parcel - my children excitedly asked me to read it straight away, unfortunately, that did not happen, and instead this gorgeous book was misplaced - leading to many questions from the youngest one of "where's the box book". Needless to say, when this crafty wee hiding book came back a wee while later, I DID sit down and read it that very same minute. However, I digress, on to the review!!

The first thing that caught our attention with this book was the illustrations. They are beautifully done - simple, stunning and catch the attention of the reader straight away! Being an ex teacher, I asked Miss 7, Miss nearly 5 and Master nearly 3 what they thought this book might be about, and they got it in one - a magical, special, exploding box!!

Opening the cover, it is a good quality book. The cover is slightly shiny, meaning it will withstand many many many readings that I imagine this book will have. The pages are also good quality - nice to hold and turn.

On to the story - it is a wonderful story centered around a boy named Finnigan Flynn who receives a very random parcel on his doorstep with instructions not to open it. Being an inquisitive child, Finnigan doesn't listen, and opens it and gets a very very big surprise! This book is both well written and well illustrated, with the rhyming in the story making it tick along. It made us want to read more and more and more, to see what would happen next. The book has some amazing characters, and the descriptions do not do it justice.

What I loved most about this book was that when reading it, the three kids all kept guessing and wondering what was might happen next and the ideas they came up with were like a page straight out of this book. Highly recommend this book as a great "read again and again" story.

What an awesome read! I love a book that leaves you guessing and this is exactly what this children's book has done. Not only are you guessing when you first read the title and see the cover illustration but it also leaves you wondering at the end as well. I am not one for surprises so Finnigan Flynn acted just the way I would of by opening the box.

The book was so easy to read with its rhyme and rhythm. It was written in a very similar way to other known authors Lynley Dodd and Dr Seuss. From a teaching point of view there was so much to talk about. I love the rhyme throughout but I liked how some of the rhyme although sounded the same had different spelling patterns. I liked how there were words that children of today may not have been introduced to eg trice, frocks. The end of this story leads into children making up their own story as to what happened when the girl opened the box.

I love the soft but action packed illustrations in this book. In each illustration gives the impression of movement. I highly recommend all to have this book on their book shelf and I know that myself and my children have already had hours of fun creating our own 'what's in the box'.

Many of us play pranks and jokes on each other on the 1st April each year, but why? The idea came to Britain from France after 1 January was chosen by the French to replace 25 March as the first day of the year. Before this, it was customary for folks to give each other presents to celebrate the first day of the new year. The problem was that the old date of 25 March very often fell during holy week and, accordingly, ... more...