« Bob the Builder - Snowed Under: The Bobblesberg Winter Games review 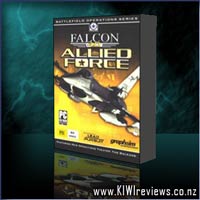 Engage the enemy in two operational theaters, Korea and the Balkans, each covering over a million square Kilometers of territory. Dogfight over a wide variety of landscapes: wide seas, open grasslands, dense forests and snow capped mountains. Fly nap-of-earth missions through detailed terrain and undulating valleys.

Simulate an entire war with the most advanced dynamic campaign engine ever made for your PC. This remarkable feature presides over tens of thousands of vehicles: air, land and sea. No two missions ever fly the same!
•  Fly alongside and against other aircraft prosecuting their own missions.
•  Bomb damage may or may not be repaired, depending on enemy resources and command.
•  Negotiate the electronic warfare arena with ground, air and sea radars.

Rely on advanced AI (Artificial Intelligence) to control your wingmen, or direct them as required throughout the mission.
•  Wingmen use real world doctrine and tactics in all aspects of their missions. Tune in to radio chatter directly related to the events unfolding around you.
•  Call on AWACS assistance in finding targets when you need help defending your flight from interception.
•  Go up against challenging enemy aircraft, sea and ground defenses all of which employ real attack and defense tactics.
•  Experience authentic Air Traffic Control procedures with stacks and talk down via your aircraft's radio.
•  See busy airbases with parked and taxiing aircraft, helicopter traffic, and aircraft takeoffs and landings.

Participate in cooperative or adversarial multi-player flight over a LAN or over the Internet. Join large packages that can include over 20 aircraft -- some of which are flown by computer AI, others under human control during multi-player flight.

The Temple of Elemental Evil
Rating: 5.3

If you enjoyed the original Falcon 4.0, then this will most certainly re-ignite your engines and bring back some of that old nostalgia.

I like flight sim type games and this one is no exception, although it has a very steep learning curve if you are unfamilliar with the original Falcon 4. Also highly recommended is a good quality HOTAS (Hands On Throttle And Stick) System, like the Saitek X-45.

The supplied manual is very comprehensive and it's reading is a must if you are to even understand what you are doing in the Tutorial Flights as there are no written or spoken instructions on screen what-so-ever to guide you like most other Flight Sim/Combat games do, which is a bit of a let-down in my opinion, but overall a great game and well worth the price paid.

•  Warriors from across all of time have been collected and brought to you.
•  More than just a strategy game, embark on a build and battle fantasy adventure like no other. You build the environment, making every encounter unique.
•  Then select your team. From futuristic spies to the cunning of a samurai warrior, you choose the best ... more...