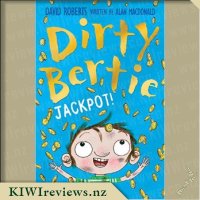 With ever increasing madcap schemes and crazy capers, Bertie continues to delight his legions of fans who revel in his revolting ways. Join Bertie in his 25th adventure as he wins the lottery or thinks he does, cooks up a storm in the kitchen and finds himself face to face with a demon dolly.

Make Your Own Paper Dragons
Rating: 9.3

The Twelve Days of Christmas
Rating: 9.6

My 7 year old daughter loves the dirty bertie books she has been collecting them for a year now and when this one came up for review she got really excited about it so we had to do it. Now I love that the titles always catch a good attention. The words in the book are a good size for children learning to read chapter books with minimal pictures so they have to use their brains to think what is happening. The words are very descriptive. I listen to my daughter reading it out loud to herself while in bed at night the best thing I found with this book and other dirty bertie books is there are 3 stories and each have little chapters this getting them use to chapter books as-well. Now this book is really aimed at boys I feel but my daughter doesn't care and loves them.

When I asked my daughter to explain the book after reading it she seemed like she enjoyed and I videoed her about it as she wont let me read the books to her. She didn't remember much of the 2nd story which tells me she wasnt as interested in the crumbs story as the other two stories. After the video she did mention the last story demon dolly was a little scary but she was brave and it didn't worry her. I recommend this books to young readers boys and girls and the price for this book is pretty good as it can be read over and over again

I've never read any Dirty Bertie stories before. I have seen him about though, in the picture book section at the library and at the book fairs. However, neither of my kids have actively sought to read a story involving him. Miss 8 is quite germ-phobic and I wondered if that might be the reason. However, when she saw this book in the review pile she was very keen and thought that her sister might enjoy it as well.

This book is set out like a kid's novel. It has a soft cover with a striking image of grubby Bertie. The bright blue of the background with the gold foiled lettering on the cover and the gold accents on the coins raining down give it a nice touch, as do the water-colour splotches here and there. I assumed that we would be reading one novel about some kind of windfall. Though, I must admit I didn't read any of the blurbs.

We started to read the story and both Miss 8 ad I agreed that Jackpot was a bit of a train wreck story-wise. We could see immediately what had happened, and watching the family make some silly choices about money was quite painful. However, it was entertaining and at the end there were smiles and a few "silly people" groans. Bertie is quite a silly boy, similar in tone to many school boys in books we read. He is clever in his own way, but doesn't think his actions through.

I was surprised to find after the Jackpot story, another started. This was good though as it gave us a change of scene. Of course, more groans and oh dears, especially with Bertie's baking. Miss 8 exclaimed at one point, "Oh no, mum! I knew it. He would mix up the salt and the sugar! Well, sugar and salt can look the same. But they sure don't taste the same. That cake is going to taste like the beach". I couldn't agree more, yuck!

The last story got a wee bit spooky for Miss 8, who generally likes a good scare. She was worried about the Demon Doll, so I needed to clue her into what was happening. I thought it was pretty creepy too. As a collection, I thought the stories worked well together. The stories increase in absurdity. I think the Demon Dolly was well placed at the end, as the thrill-filled climax of the book. I've also started reading it to Miss 3 and she is loving it, though we will skip the Dolly story for now!

In 1955, at seventeen years of age, Judith Graham entered the Dominican Order and began her life as Sister Stephen. In this compassionate yet frank account she recalls her years as a Dominican nun during the repressive pre-Vatican II era.

The vows of a nun - those of poverty, chastity and obedience - encapsulated in the commitment of 'death to self', proved too much for Sister Stephen. Her battle for acceptance and spiritual ... more...