The Following: The Third and Final Season review 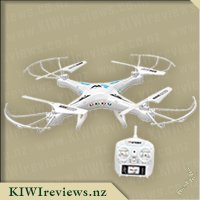 Get outdoors and fly this quadcopter - aim for the sky.

As far as quad-copters go, this one has proven itself to be far more impressive than the only other one I've ever owned, which was a big, bulky Intruder UFO, so I was interested in seeing how this smaller, lighter version would compare, and the results were quite interesting. This drone is quite lightweight, it is easy to transport if you're holding it by hand, but it is a bit more difficult if you're trying to transport it by bike, mainly because of the volume it occupies.

At first I thought that it's light build would make even the slightest bit of wind knock it all over the place, but in fact this thing handled better than I expected. The weight of the drone allowed me to send it to some pretty cool heights, about 10/15m was about as high as I was willing to take it for two reasons, potential loss of radio contact, and the fact that the park I was flying this thing in was right next to a school-side road, which can get busy at times and become a potential flight hazard.

Having flown a drone before, and having a basic understanding of aerial vehicle movement (pitch, yaw, etc.), my time flying this beastie wasn't as much of a nightmare as it could have been for any novice pilots, who may have found the controls a bit finicky. The controls themselves are pretty standard, left joystick is throttle and Yaw (z-axis rotation), while the right joystick is Pitch (x-axis rotation) and Roll (y-axis rotation), so all in all, this drone was relatively easy to fly.

When I tried practicing a couple of maneuvers, mainly bank turns, this drone was able to execute them pretty well, it also had a pretty low throttle delay, or the time it takes to go from no throttle to full-throttle, which allowed me to pull my favourite hat-trick, a stall recovery, where I just cut the motors, let the drone fall for a bit, and then ramp the throttle up to full and start flying again, it was glorious! So, this drone's flight ability resulted in quite a bit of fun for me

The flip, or "single eversion", feature was quite fun, but it took me a bit to realise how to use it. I thought that pressing the button, located next to the antenna and on the right-most side, would make the drone flip instantly, but there was one key step I was missing. After you press the button, you flick the right joystick in some direction to make the drone flip in that direction, so flicking it forward makes it forward-flip, backwards makes it back-flip, and you can even flip it either left or right, which was new to me!

The lighting on the craft was most impressive, not only does it light this thing up like a Christmas Tree in the dark, but it also allows you to keep track of orientation. There are flashing green and red lights on each of the 4 propeller arms, which let you track how close the drone REALLY is to obstacles, and on each of the four sides of the central body there are different lights are what show the orientation of the craft. Red is the front, Yellow is the rear, Blue is left, and Green is right. I noticed the efficiency of my flight pivoted on this information by a huge amount. During the day, and at a distance, it was very hard for me to know where the drone was facing, and from that distance, looking at the drone head-on, I couldn't tell if the drone was leaning toward or away from me, which meant that when I tried to bring the drone back, I was sometimes sending it further away!

I tried one round of night-flight, and found that now it was much easier to track and maneuver the drone. The lights are quite bright, so they could light up any nearby obstructions well enough for me to see, and I was now able to tell which way the drone was facing, reducing the risk of losing it. Landing the craft is probably the most difficult part of flying this drone, even though it comes with landing skids, I couldn't land this thing without it leaning a bit, catching the ground, and flipping over, I will soon be compiling a video of my recorded flight-time, which I will post the link to on the KIWIreviews Facebook page, and then you can see just how often this happened to me!

Because this happened on a grassy field, I would recommend this drone primarily for low-light, indoor flight to reduce the probability of crashes. I love how modular this drone is, a few of the spokes on the propeller-guards got snapped, and while this hasn't posed a problem, if it ever does I can track down and get replacements, whereas with the other drone I had, this couldn't be done. While the listing shows this to be the WF-1501 model, I actually got the WF-1502 model, which was only different in the propeller-guard design, the pieces on this model didn't just attach to the fuselage, they also attached to each other, making a more sturdy and self-reinforcing design, which was awesome.

The charging system for this drone was interesting, unlike other drones I've seen, this one charges via USB, and since my computer isn't on all the time, I tend to use the USB-to-3-pin plug adapter I use for my phone, and it was still functional for this. Another interesting feature is that the charging indicator light isn't on the drone, instead it is located inside the USB plug itself. The light turns off while charging, but then turns on once it detects a lack of electron flow, which works quite well. I got between 10 and 12 minutes flight time on full battery, and I recorded the charging time to be about 88 minutes maximum, which isn't bad, it's only just under 1 and a half hours.

The user manual was a bit hard to understand, thank goodness there were pictures! The text had obviously been translated, as there were several grammar errors that I see popping up quite frequently in translated text, it looked almost like someone had used an early version of Google Translate to convert the text, but with the diagrams available I was able to cope.

Overall, I think that this is an impressive little toy, it was a shame that this one didn't come with a camera included, as I would have been able to obtain some pretty awesome footage, but for the moment I can make do with filming using my GoPro camera on the ground, and in the air using a rather interesting method

I think that this is a very affordable, and quite fun drone to play with, and I would highly recommend it to all of you, or at least those of you who are over the age of 14, that is! Enjoy.

Dressy Daisy Outfits feature adorable themes that are easy for your child to dress on their own.