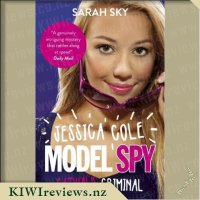 Models, spies and lipstick gadgets in this fast-paced teen series. Jessica Cole has been recruited to Westwood, MI6's secret division of supermodel spies. Her first official mission seems simple at first, until it turns into the biggest cyber-attack ever known, threatening the security of the whole country.

Then it emerges there is a traitor in the midst at MI6 - and suddenly Jessica herself is being accused. With no one believing her innocence, and the country on the verge of chaos, Jessica has no choice but to take matters of national security into her own hands and catch the culprit - fresh from the catwalk.

Score: 9.0
Product reviews for listing 1837: March to the Sound of the Guns -  Written by Ray Grover

During World War I New Zealand shipped one hundred thousand young men halfway round the world to fight at Gallipoli and the Western Front. Eighteen thousand were killed - a death rate of nearly one in five. Thousands more were maimed physically and emotionally. The men had gone with the encouragement of their families and the blessings of their churches.

In March to the Sound of the Guns five people tell us the story of their ... more...