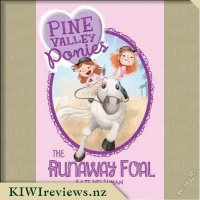 Its winter at Pine Valley Ranch and Maddy and Snowy are both wearing warm woolly coats! Its also time for the young foals to move to the new paddock, away from their mums. But little foal Sunny isn't ready to leave yet. Can Maddy, Iris and Snowy catch the runaway?

We really enjoyed the first book in this series so Miss Seven and Miss Nine were very keen to start reading book two in the series The Runaway Foal. This book continues the story of Maddy, her new friend Iris and their adventures at Pine Valley Ranch. In the same vein as the first book Maddy has more lessons at the Pine Valley Ranch. Iris and her horse Monty and Maddy and her horse Snowy have become firm friends.

I like the type used in this book. It highlights certain words which is quite good if you want to use this to get your child learning words. I also love the illustrations in this book. They are really nicely done and we have had a few laughs over them as they are quiet funny. Overall this is a lovely lighthearted book that any horse mad girl would love. I think this is great value for money and would definitely recommend it. We are certainly looking forward to reading book three as soon as we can get our hands on it.

When I saw this book up for review, I checked out the details and saw it was suggested for independent readers aged 6 and upwards. Described as an easy to read chapter book, I was expecting a starter book along the lines of Billie B Brown or Ella and Olivia for my 7 year old - something she could read herself if she really wanted to, but most likely would prefer I read to her!

Upon receiving the book, I noticed straight away that it was a much longer book than I was expecting and probably more of a step or 2 up from the beginner book that I was expecting, and a bit beyond the reading level of my daughter. This didn't worry us at all, as Miss 7 still really loves being read to, and lengthier books are not a problem at all... although the chapters are fairly long so if she was really tired at bedtime, we had to stick to half a chapter a night. It will also be good news for anyone hoping for something for an older child - rest assured this won't be too easy for them. There are sketched pictures on every second or so page which is always nice in starter books.

This book is actually the second in the series but that wasn't clear on the cover and although it turns out we also had book 1, my daughter picked this one to start with as the cover and title really jumped out at her. It turns out that reading the books out of order is not a problem at all.

Firstly I'll say that this book is a must for horse-mad kids - there's heaps of horsey terms and info to be found. Being not so familiar with horses, I even found myself learning heaps about horses and it made for some great discussion points with Miss 7. There's some good general life lessons here too with some moral decisions to be made and lessons to be learned.

As always, I specifically ask Miss 7 for her opinion before writing the review and she was extremely enthusiastic about this book which was great to know, as there were times that I wondered if the story wasn't holding her attention or if the information was over her head. And she tells me that she now wants to ride horses for real and even hold the reins (unlike the couple of pony rides she's had where she's been lead around)... oh boy, I was hoping we might escape having a kid mad on horses! But I won't hold that against my review score and summarise by saying that this is a good decent book with a good length story for a pretty decent price.

The Mummysons are just your average, everyday family. Yes, they have a pet mummified fish and live in an Egyptian pyramid. Yes, Milo Mummyson is studying moths - the one thing deadly to mummies. Yes, Muriel Mummyson is making plans to build the ultimate pyramid play park. Yes, their dad is obsessed with creating a delicious Sphinx Drinx, if only it didn't stink. And yes, something is destroying Freak Street park, while families are trying to picnic.

But that's nothing out of the ordinary, right?