« Sebastian Lives in a Hat review 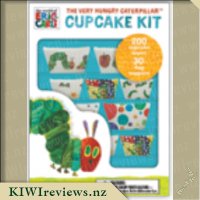 I love the Very Hungry Caterpillar book and just think its a neat idea for a young kids or young at heart kids birthday theme or just an everyday cupcake that is made. When I received the cupcake kit, I was actually surprised that 200 cases and 30 flags with a 5 recipe book (which contain 3 cupcake recipes and 2 buttercream recipes) actually was in that box. The recipes seemed really yummy and following the theme of the hungry caterpillar with a strawberry cupcake, cherry cupcake and then vanilla cupcake in an ice-cream cone.

After looking it over and over again I decided since I couldn't find strawberries cheap enough at this time and I don't have any cherries I went with the ice-cream cone vanilla cupcakes without an ice-cream cone, as I was making these gluten free and there are no flat bottom gluten free cones. The recipe was easy to follow leaving it a nice smooth batter to pour into the cupcake cases. The medium cases fit perfectly into our baking tray and was very pretty looking, taking a cupcake to the next level. Filling the cases seemed something to be watched as every recipe we have used always only makes 10 cupcakes we were a little worried, but we got 12 all the same size. This recipe was easy to convert to gluten free as-well taking out the normal flour and adding our own gluten free mix instead, pleased to say it didn't make the mixture runny or too thick. They were cooking in the oven for 15minutes then took them out as they were cooked nicely. All again the same size then out to cool, they looked really good on top with a nice crunchy looking top.

To add to the cupcake I used the Chocolate buttercream frosting which says it will make enough for 12 regular cupcakes, I found this to not be true I believe with the way I use frosting it would of been great for almost 24 regular cupcakes. The frosting was a lot of back and forward with making it doing 1/3 icing sugar each time then stiring again I found this hard and annoying but got there in the end. Adding real chocolate to it seemed a little strange and I did worry what it would turn out like but carried on anyway with it. I did add a little more chocolate than it said as I liked the flavour a little stronger. This frosting was very fluffy and not thick I didn't need to add any extra milk. Putting it into the pipping container was easy and pipping it out was nice and smooth leaving it all silky on the cupcake. Added sprinkles on top as it said for the ice cream cones.

Taste testing, since I have made so many recipes and turned them gluten free and failed every single time I was worried since I am pregnant and nothing is staying down anyway I did panic a little with the test tasting aspect of this but gave it a go. It was soft and fluffy inside and biting into it gave a small crunch from the sides, top and bottom with a yummy chocolate frosting on top which topped it all off nicely. This was by far the best vanilla cupcake recipe I have made and NOT failed on turning it gluten free. Even my partner and friend had a try and both enjoyed it, partner went back for a second helping.

What you get for $25 is good and if I was hosting a birthday party I would actually spend that much to do the party the whole theme, with the little banners they are reusable as they are a plastic bottom but not if they get wet or dirty on the top. The instructions in the book are easy to follow even a child helping could work them out. I have also found the vanilla cupcake recipe you could put so much different things into that mixture for different flavours and textures.

I was lucky enough to be selected to review this cupcake kit in the last round of review goodies. I love Eric Carle books, and The Very Hungry Caterpillar is a family favourite with both daughters being able to quote parts of it. My youngest reads and re-reads her copy on an almost daily basis, so she was just as excited about the cupcake kit.

This kit comes in a cute little box and has a red ribbon handle. Its rectangular and not much wider than a box of cake mix. For this reason I feel like it would be great for storing in the pantry and really easy to store too. Inside the box there is a glossy recipe booklet. It folds out and has recipes on the front and back. The cardboard is medium strength, not too flimsy but still bendable. There are 5 recipes in the booklet. Three of the recipes are for cupcakes and the other two are frosting ones. There are also some tips about decorating. We also got 200 cupcake liners and some cupcake picks as well, which had a safety warning on them about sharp points.

As we had some strawberries left over from Christmas day, I decided to bake with a kid in tow. She was thrilled to be allowed to help with the caterpillar cakes. We made strawberry vanilla cupcakes. The recipe had reasonable complexity to it, with quite a few ingredients called for. Plus we also had to mix parts of the wet with the dry and combine slowly. So this activity would best suit a shared kitchen experience, or a keen baker who knows their way around a recipe.

The batter came out really fluffy and glossy and I knew the cake would be a bit more dense and rich because of it. I was interested to see how the cupcake liners would hold up. With some cupcake batters, a liner will pull away from the sides once baked. I decided to use mostly the kit ones and then a few in foil wrappers which I knew to be a little more hardy. When the cakes were baked and cooled, I did see that the kit liners pulled away slightly. This was a shame but I think that if you double lined them it might make a difference. You could also save the kit liners and just use them for presenting the cakes rather than the baking process.

The frosting we selected to make was the creamy vanilla which was essentially a cream cheese icing. The icing was gorgeous and licking the bowl was a delight. I even had to wrestle the bowl away from my kid. We had visitors over that night and they all agreed that the cupcakes and the icing were the perfect combo and they disappeared very quickly.

This kit would suit anyone who likes to bake, but especially a parent who is throwing a Very Hungry Caterpillar birthday party. The picks and liners would look perfect on the goody table. Once the kit has been used, you can throw away the box and keep the booklet in your recipe cupboard.

Winterstrike spy Hestia Mar has been sent to Caud to recover details of an ancient weapon. During her stay in the Martian city, she encounters the ghost of a warrior, who turns out to be the encoded representation of the city's bombed library. Hestia Mar manages to access the library's data, but realizes too late what she has done: by downloading the information, she has virtually guaranteed the use of the weapon against Caud by her own ... more...