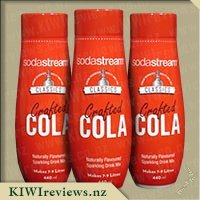 I love my soda stream machine and it gets well used during the summer but when it comes to cola I'm very fussy and tend to never buy cola flavouring. I've tried a few over the years but never found one I like so I tend to just go and buy coke when I get a craving for it. When I saw the crafted cola up for review I decided maybe I should give it try after all soda stream is constantly changing and improving their range.

When my parcel arrived I had just got home and was ready to sit down with a nice cold drink so it was the perfect time to try it. As I was keen to give it a go I didn't stop to read how much of the syrup to put it and found on first taste I way over done it. I decided to give it another try so I fizzed a second bottle This time adding the right amount of syrup, first taste I was impressed while it wasn't completely the same as my favourite coke it was very tasty. The bottle went down very quickly and for the first time ever I have found a cola syrup I can happily make and drink at home. The crafted cola has made my must buy list for sure, it's great to have a cola I can make at home. Not only does it work out cheaper to make my own it also cuts down on the amount of plastic bottles I throw out, both are big selling points for me.

In my entire life there have only really been 2 favourite flavours of soft drink for me: Sprite (or any lemon-based soft drink) and Coke. As an actual soft drink, this stuff was really nice, it had that familiar cola flavour, and it had a different balance of component flavour that was actually very nice. I have heard some people saying that this stuff is quite sickly sweet, but if I am to be honest, I am actually quite fond of sickly sweet drinks, so I found this one more appealing, and the burst of sugar made it quite refreshing.

Much to my regret, I was only able to use this concentrate in a fizzy drink once, possibly twice but I can't remember, because I thought that our Sodastream machine had a full tank of CO2, but I was wrong and I was only able to try all of the syrups that I got for review once or twice before the tank was empty.

When only mixed with water, I was afraid that the lack of fizz would mean that the resulting mix would be decidedly unpleasant, but in actual fact it was quite nice, it had the cola flavour, but it actually a lot nicer since there wasn't any gas to disturb the flavour, so essentially it was cola-flavoured juice. To summarize, I would say that this is a cheaper, more economical and caffeine-free alternative to Coca-Cola, but I would say that this is nicer for those who enjoy the process of making their own soft drinks and enjoy cheap yet nice-tasting alternatives to their favourite beverages.

Well, that's all I have to say about this drink, so yeah, I would say this is a good product, I would recommend it to anyone. Enjoy!

Having used Soda Stream machines for years almost back when they were glass bottles, I have seen so many different bottle shapes and I must say I like this taller look. The smooth sauce bottle shape is easy to hold and use. The red gives the flavour away immediately, you know you are going to drink Coke. Isnt it amazing how colours depict the flavour more than the words.
I stopped drinking Red Coke years ago because it is so heavy in sugar I can actually feel it making my heart race and slowing me down so to try a Soda Stream variant I was a bit iffy, but after looking on the back of the bottle you can easily see that the flavour does not mean that it has to be diet or light coke. You can enjoy the Red Full Fat taste as I like to refer to non Diet or Zero variants without worrying about the 80% sugars.
The flavour is very much like a personal favourite of mine Royal Draught Crown Cola, not Coke, not Pepsi, more like a crafted taste. It is fitting in so well with this product considering it is a crafted cola. The flavour really is on point. I am not sure why they call it a classics unless this exact flavour was out back in the day, I certainly don't remember it, but I prefer this new flavour over the standard stubby bottle concentrate.

Initially I was a little concerned about tasting the Cola. Memories from when I was a kid having SodaStreams where it tasted so weak and it was just yuck kept surfacing. There was also the fact my husband has been dead against getting it as he prefers the real thing so when I received the oportunity to trial this thanks to KIWIreviews I tentatively put my hand up.

First off the bottle is very red and can be said rather basic and does not get me really excited. I found the lid concept really hard not to make a mess with also it is rather hard to see the counter on the side which states Sweet or Sweetened. Because I wanted it rather strong I just pour to the top. The smell definitely is cola and smells rather yummy.

It looks like Cola, it smells like Cola and it tastes like Coke that has been left out on the counter for a day. Not quite Pepsi or Coke but in between the both of them and I love it. It is so easy to drink and leaves you wanting more. It feels healthier than the other varities out there as its not as fizzy even though it does have a bit of sugar in it. definitely a great treat for this hot summer days. Will continue to buy and have in the pantry as I really enjoy it.

Monteith's Crushed Pear Cider, like Crushed Apple Cider, doesn't use concentrate in its production. Instead it's made purely with sun ripened Nelson pears which are first crushed to release their juice, then directly fermented.

Because Monteith's doesn't use syrup concentrate, the end result is a lighter and truer cider. Monteith's Crushed Pear Cider is best served over ice or enjoyed straight from the fridge.