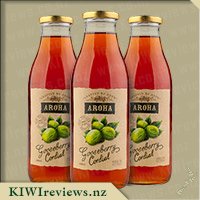 The Gooseberry Cordial has a sharp flavour which seems to lengthen the neck and widen the eyes. We are very grateful to the farmers in Rotorua who brave the prickly gooseberry bushes to reach for their best berries.

Gooseberries are full of Vitamin C and scientists seem to think they are keeping a lot of healthy goodness up their sleeves. If you look on the internet you'll see experiments have found it improving brain function!

Aroha can't promise to raise your IQ but we can guarantee that you will enjoy a hell of a lot of goodness from the Gooseberry Cordial. So are the big wigs - they've listed it as a finalist in the New Zealand Food Awards. Good on them!

Being an 80s kid means I got to experience those really awesome moments growing up, like; strawberry farms where we could go and pick our own strawberries, Tadpole hunting from dusk to dawn in random creeks far from home, Eating wild berries without a care in the world or any thoughts of pesticides or allergies entering our heads. One such wild berry was the gooseberry...and I loved them!! So to see gooseberry cordial available for review was all very exciting, and a trip to childhood memories.

My first confession is, I expected the cordial to be much lighter in colour and leaning more towards green lol I certainly didn't expect the rich dark plum colour it is in the bottle. Not fuss though :) I do love the simple and natural labeling and that the cordial ingredients are all natural with no preservarives. It is always a positive getting an all natural product. I was however surprised to see tha label did not give any indication as to how much to use per glass/drink though but do acknowledge a serving is considered 100mls and the bottle states it makes 3.5L all up.

As everyones taste buds are different, we just mucked around with strength until finding a mix that suited each individual person. It is a wonderfully refreshing drink delicious over ice on a hot summers day. Its not to shabby with a dash of vodka either and adds a really nice element of zing to a plain old cheesecake. Unfortunately I forgot to get photos. I admit however, the price tag will stop me from ever purchasing further. in todays day n age and with the costs of food etc nearly $13 a bottle is simple just not practical, not even as a treat now and then, which is such a shame because it is lovely.

I grew up with a couple of gooseberry plants growing wild in my backyard and I loved nothing more than picking them and chowing down on as many as I could. Now, sadly, those plants are long gone but I saw this and knew it would have to be on my 'to request' list. I love the label design on this bottle, I think it suits the product and company name wonderfully. The one issue that I have with this is that whilst it says it makes 3 1/2 liters it doesn't give you a rough idea on how much water per cordial. Worked out that it should be 1/2c cordial to 3c water.

My first use for this was as a straight drink and I really liked it though would have liked it a little stronger, so the next time I made a drink I added a little extra syrup, having made it fizzy first, and it was lovely both a bit stronger and as a fizzy drink. Then, today, given it was such a hot day, I decided to make some up, pop it into cups and bung it into the freezer to make our own little slushies at home. Two out of three of the kids gobbled it down and thought it was delicious. My other child liked it but didn't love it. Happily for me, I made an extra one and I can't wait to finish it tonight.

This was nice, but at this price I will need to wait till it comes on special.

I have to admit that I've never really heard of a gooseberry before, let alone actually tried one so when I saw this product up for review I had to give it a go.

When it arrived I put it in the fridge overnight and then the next day I took it out and filled a glass about 1/4 full - I checked the bottle to see how much to put in but it didn't say so I put in how much I'd usually use for other cordial type drinks. I filled the rest of the glass to the top with filtered tap water and by this stage my daughter had come into the room and asked for some too so I prepared her a slightly weaker version. Then my neighbour and her daughter came in so I prepared them some too.

The verdict was very positive. Mine tasted delicious, just the right amount of sweetness. My daughter downed her glass and asked for some more, which is always a good thing. My neighbour and her daughter both finished theirs and politely asked for more too. The next glasses I poured I also added some ice and this just made it so much more refreshing (it was a hot day after all) but didn't take away from any of the flavour. I'm not sure what an actual Gooseberry tastes like but if it tastes anything at all like this drink then I'm going to have to hunt some down.

I really like how it comes in cordial form because you can create a drink just how the individual person wants it, I like my juice sweet so I'd have more cordial where my children have less cordial and more water because I try to watch their sugar/juice intake. Being a cordial, it also opens up a whole range of things you could do with it, making cocktails, using it in baking, making ice blocks, you could even add it to a stir fry sauce to have a different flavour to your cooking.

I did find the price for this cordial to be a little on the high side so it wont be making a regular appearance in our house but it does make a delicious drink and the actual bottle goes really far so I will be keeping an eye on it to buy as a treat or when it's on special. When I was a child, I used to be sent off to school each day with a packet of sandwiches, a piece of fruit (usually an apple), and a glass bottle filled with home-made "orange cordial" - a noxious blend of sugar, artificial flavouring, and food colouring, prepared at home from a bottle of bought concentrate and then further diluted for drinking.

We have come a long way since those days. There is a great range of flavours available now and an emphasis on natural ingredients. Gooseberry is a flavour I would not have thought of for a drink so I welcomed the opportunity to try Aroha's Gooseberry Cordial product.

It was amazing - a gooseberry flavour as authentic as that of the fresh fruit I have picked from plants growing wild in places like the Cardrona Valley, slightly tart but with enough sweetness to match - resulting in a genuine flavour delight. I was hooked from my very first taste, and the friends I shared it with were equally positive about the flavour.

Having first tried it chilled for breakfast, I wanted to try some other possibilities. I had prepared some pancakes for dessert that evening, so I experimented with a mixture of three parts fresh cream to one part undiluted cordial and poured it over in place of my usual maple syrup.

The result was voted unanimously to be a great success. It is important to note that there was no sign of curdling or separation when I combined the ingredients - the result was smooth and the colour (slightly darker than that of regular cream) was attractive.

A second experiment was with home-made iceblocks. I knew it would be very hot later in the day, so I made these up before lunch and they were completely frozen by the middle of the afternoon. I have made iceblocks before using fruit juice - the secret is to make the mix stronger than would be normal for drinking purposes. Then I added some borage flowers for decoration and flavour.

Unfortunately, the frozen product was quite cloudy so the flowers cannot easily be seen! Also, the iceblock sticks were large in relation to the moulds so they obscured the contents - next time I might upsize. I will also try rose petals instead of borage next time round.

Would I buy this product again? Definitely! It delivered as promised and the three adults who sampled all three ways of serving it could not decide which they preferred - certainly there were no leftovers!

Light damages milk, and independant studies have shown it. Like that published in the Journal of Dairy Science which has shown milk can start to lose vitamin A in as little as 2 hours of continuous light exposure, and research supported by Cornell University which has shown that light exposure can degrade vitamins B2 and A in milk too.

Both of which are essential, vitamin A supporting healthy eyesight and our immune system, and ... more...