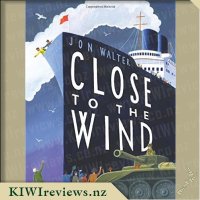 Close to the Wind product reviews

A simple, resonant, and utterly heart-shattering debut about greed, love, trust and what matters most when your world falls apart.

Ten-year-old Malik's world is falling apart. Soldiers have invaded town, and his mother is missing, leaving Malik with his grandfather, Papa. Along with a thousand other refugees, their hope for escape to a new life lies in gaining passage aboard one ship--but the demand for tickets is high, and so is the cost. Can they make it on? And will they find Mama before the ship departs? When things don't go as planned, Malik must summon all of his courage and resourcefulness to survive.

A heart-wrenching and suspenseful story of sacrifice and resilience, Close to the Wind confronts the realities of war in a timeless and accessible way.

When I first started to read this book, I found myself trying to work out which country the war was set it. The names were European, but did not share enough commonality to be definitive. They could be Italian - or Czech - or Norwegian - or Polish - or British - in fact, they could be from any country in Europe that had a coastline and was within a few days' voyage of another country.

In the end, however, I gave up. The story was clearly set in modern times, but there were no further clues as to time and place. And as I read on, I realised that it really did not matter because the story was dealing with universal issues, told through the eyes of a ten-year-old refugee boy trying to find his mother, and meanwhile learning to survive amid the turmoil of war.

The reality of being dispossessed of everything you hold dear - home, possessions, even family members - is graphically and sympathetically presented. I was constantly reading on, unable to put the book down, anxious to know if Malik had overcome the latest crisis and managed to move on. It makes for an uneasy read as you can imagine a similar war taking place in your own community and what it would be like to suddenly lose everything.

I think that for older children there is a lot of thought-provoking material here. Malik has to make decisions that no child should ever have to make, and he has to fight and learn to trust people in order to ensure his survival.

Although I think most children over 10 would cope with this book, they might need some adult assistance to help them unpack some of the more difficult scenes. In one chapter, an old man has a tooth extracted without any anaesthetic; this is recounted so precisely that I could imagine the pain myself. In a later chapter, Malik's cat is threatened and he has to make a heartrending decision. Many readers would find themselves really challenged to imagine being in Malik's place and having to cope. Would they be resourceful enough and brave enough to survive?

I did enjoy the book and would like to read it again some time as there was so much to think about in it and I want to make sure I did not miss anything. In the meantime, I will certainly be recommending it to people as a story well worth reading.

The ancient menace has finally escaped from Lalonde, shattering the Confederation's peaceful existence. Those who succumbed to it have acquired godlike powers, but for now follow a far from divine gospel as they advance inexorably from world to world.

Governments teeter on the brink of anarchy, the Confederation Navy is dangerously over-stretched, and a dark messiah prepares to involve his own version of the final Night. ... more...