I Yam a Donkey review 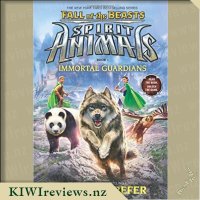 In the world of Erdas, every child must discover if they will summon a spirit animal, a rare and incredible gift. Conor, Abeke, Meilin, and Rollan were rare even among those few. They summoned legendary animals - brave guardians who were reborn to protect their world.

Now more of these legends are appearing across Erdas, bonded to special children. But a dark force has emerged. Older than memory, it has slept for centuries beneath the surface of the world. With the power to tear away spirit animals, it begins a rampage that will be felt in every corner of Erdas. If the young heroes can't stop it, the darkness will first consume the spirit animals... and then the world.

I have read the first series in the spirit animals and totally loved them so I knew I wanted to read the next series of books and see what happens next.

The characters are well written, enemies are now allies and they have to learn to work together even if there is no trust. I found that there were references made to the war from the first series so I am glad I had read the books so could fully understand the tensions between people who were supposed to be on the same team. There were obviously new characters and the plot was easy to follow but I found the end felt wrong, I was surprised that the story came to such a sudden end. It felt like the plot was halfway through and the author suddenly decided to end the story.

I have had a look at the website and see there are a few books still to come so I know I will be reading the rest of the books even though this series hasn't got me as fascinated as the first series did. I found the story was a lot shorter and there wasn't as much action as the first books had. If you are looking for books that are logical then this is not the series for you.

"Immortal Guardians" is the first book in the "Fall of the Beasts" series. (This series is the second of two series that together make up the "Spirit Animals" books.) I approached "Immortal Guardians" with an open mind, prepared to judge it on its own merits, and I found that was just fine - it was not necessary to have read the first series of "Spirit Animals" in order to pick up on the background.

I was impressed on opening the book to find a world map - but a map with a difference. It was clearly modelled on the map of the real world, and the lands were labelled in such a way that it was clear which real area they derived from; but there were many differences. Clearly this was going to be a fantasy, not a true to life book, and that suited me just fine.

The storyline draws heavily on the mythology and cosmogony of many different cultures so it is impossible to tie it down to any particular tradition. What it does is take some common elements - guardian angels/tokens/spirit guides (depending on which tradition you identify with) - and show how humans can use them as a support and ally to accomplish supernatural feats and to overcome evil with good. The humans in the story are children, which adds to the appeal for young people as they prove to be the equal of, or indeed superior to, the adults in the story.

I had a young visitor (aged 11) when I was reading the book so I suggested we read it together. I read the first few pages aloud, but he became so intrigued, wanting to find out what happened next, that he decided he would read on by himself. He is a reluctant reader at the best of times, so full marks to the authors for drawing him in. We both read it in the end! He wanted to access the website (listed in the inside cover) to create his own spirit guide, but internet access was restricted where we were staying so we have not yet explored that particular activity.

I did enjoy "Immortal Guardians", and look forward to reading the second book in the series. Now I am hooked in, I want to know what happened next! So, I suspect, does my neighbour's son.

The king's mistress, Alice Perrers, becomes the virtual ruler of the country from his sickbed. Disliked and despised by the Black Prince and ... more...