« How I Met Your Mother: Season One review

How I Met Your Mother: Season Three review 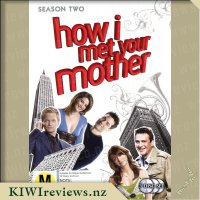 How I Met Your Mother: Season Two product reviews

A love story in reverse.

When Ted's best friend Marshall (Jason Segel) and Lily (Alyson Hannigan) decide to tie the knot, it sparks the search for his own Miss Right. Helping him in his quest is his bar-hopping "wing-man" Barney (Neil Patrick Harris), a confirmed bachelor with plenty of wild schemes for picking up women. Ted's sights are set on the charming and independent Robin (Cobie Smulders), but destiny may have something different in mind. Told through a series of flashbacks, Ted recalls his single days, the highs and lows of dating and the search for true love.

I wasn't too impressed with the first season of How I Met Your Mother but against all my better judgement I decided to stick it out, plus, I wanted to know how things were going to go for Lily and Marshall (even though I knew that they were together beyond the first season). At least it's not a quick solution, it takes at least eight episodes for them to work things out, but their relationship seems pretty realistic enough and it's nice to see something that's pretty solid when compared to their other three friends.

There were a couple of episodes that I enjoyed more than the rest of the season, "Slap Bet" which gives us two on going jokes which has given way to some great moments later on down the track. Then there's "Stuff" which is quite good when it comes to what you hold onto from you previous relationships and what you then do with them. Whilst I found this season to be an improvement from the first season I still wasn't hugely hooked but it's an easy show to watch while my kids are running around and I can't focus 100% but want something going on in the background. Lets see what season three brings us.

On May 18, Anthony, Murray, Greg and Jeff - The Wiggles - announced that 2012 would be their final year of touring together and unveiled plans for their final world tour together.

Having played in arenas and theatres around the world, The Wiggles are finally coming back to New Zealand to entertain their many Wiggly friends.

The Wiggles will embark on the Celebration Tour of the New Zealand in September with a hits loaded ... more...