Home > Categories > Entertainment > Television > How I Met Your Mother: Season One review

How I Met Your Mother: Season Two review 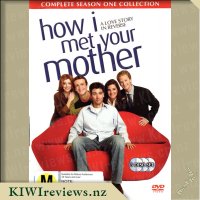 How I Met Your Mother: Season One product reviews

When Ted's best friend Marshall (Jason Segel) and Lily (Alyson Hannigan) decide to tie the knot, it sparks the search for his own Miss Right. Helping him in his quest is his bar-hopping "wing-man" Barney (Neil Patrick Harris), a confirmed bachelor with plenty of wild schemes for picking up women. Ted's sights are set on the charming and independent Robin (Cobie Smulders), but destiny may have something different in mind. Told through a series of flashbacks, Ted recalls his single days, the highs and lows of dating and the search for true love.

When this first aired on TV I really wasn't interested in watching it, it reminded me too much of F.R.I.E.N.D.S. and I ended up finding that it dragged on a bit at the end, so wasn't keen to start something new. Recently though I signed up to Netflix and they had the bulk of the show on, all but the last two seasons, and needing something to watch without having to think too much I picked How I Met Your Mother. The show took me a little while to get into the show, it didn't hook me enough to get my sole attention but I still kept going in the hope it might improve.

The characters were pretty much what I expected and didn't really give me anything to love feeling rather over the top to begin with, the characters a bit too cheesy etc for my liking. I did laugh a couple of times, but a couple of times over the entire season didn't look to be a good sign at all for the series. Yet the season finale cliff hanger was done well enough that I wanted to know how things were going to work out for the five friends and where things would go from there. Not a big hit for me, but I wanted to see how things would go in season two.

A plethora of compelling storylines play out to their inevitable, often bloody conclusions in Season 5 of HBO's blockbuster, Emmy award winning drama series.

In the wake of the numerous shocking deaths of Season 4, the season opens with a power vacuum that the various players all across Westeros and Essos scramble to fill. At Castle Black, Jon Snow must balance the demands of the Night's Watch with those of the newly arrived ... more...