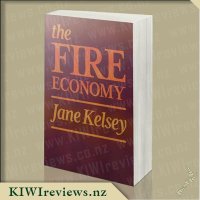 The FIRE economy - finance, insurance and real estate - is now the world's principal source of wealth creation. Its rise has transformed our political, economic and social landscapes. From rising inequality and ballooning household debt to a global financial crisis and fiscal austerity, instability has accompanied this new orthodoxy. Yet it has proven remarkably resilient, even resurgent, in New Zealand and abroad.

Examining the FIRE economy takes Jane Kelsey back to her bestselling account of the neoliberal revolution, The New Zealand Experiment. The systematic transfer of power first detailed in that groundbreaking work is shown to have advanced, embedding neoliberalism in New Zealand. The FIRE economy is sustained by the norms, rules and institutions of this new orthodoxy - a complex web of global finance, light regulation, debt, risk tolerance and property bubbles.The continuing narrative of neoliberalism in New Zealand reveals financial crises to be inherent to the very structure of the FIRE economy. How we respond to New Zealand's future crises, however, means questioning what responses the failing neoliberal orthodoxy will actually permit.

In detailing the barriers the FIRE economy presents to change in New Zealand, Kelsey points towards socially progressive, post-neoliberal futures.

Stories of an Awkward Size
Rating: 9.8

Happily Ever After: The Princess and the Pea
Rating: 7.8

OK, I have to be honest right up front as admit, this took me a LOT longer than I thought to get through - there is SO MUCH information in here, and nearly every page had me diving for Google to learn more, so I better understood what the book was telling me. But then, while not an uneducated man by any means, I freely admit I am no Nobel Laureate in training either, and this book is certainly punching way above its weight. The copious extra research, and tangents that research took me down, was by far the greatest time-consumer - ignoring all of that, the book itself I got through in a matter of a week or two of combined time.

So... a FIRE economy... Yup, NZ has it. If you are in the money business, or the housing business, you are likely part of the problem, and a piece of the puzzle that is going to screw us all over because it won't make anything better. I was astounded that all this knowledge and evidence is freely available, and the consequences of it are easy to see - short term gains for the few, by bringing about long-term losses for the many.

Then it struck me... it's a pattern we have all seen before - the environment... tear down a forest to make stuff now, utterly ruining the planet's ability to make air for everyone to breathe later. Use the waterways to dump/transport waste now, so that there's nothing drinkable later, and it just goes on... it all comes back to the few, ravaging the resources of the many, to increase their own power, wealth and standing in some arbitrary hierarchy of stuffed-shirt ponces.

To be blunt, there's so much in this book that I am overwhelmed trying to find a way to fit it into a small review... because if I were to say all I want to say, it would be almost as long as the book itself, and at 350 printed pages, that's a LOT of screen-space! (Imagine hitting the "page down" button over 1200 times, as a rough indication.) So, instead I will try to give you the10-word summary: "It's all about greed, and selfishness. Do something different, please!"

Overall, this is a dire book, but one everyone should be aware of, if not actually read. Insightful, detailed, horrifying in its depth, this is another book by an author who already has some serious titles under her belt and should be taken deadly seriously. Not for the faint of heart, it is likely to be read by only a tiny fraction of those who need to know the message, and even more likely to be ignored by those who should be doing something about changing their ways. After all, while it may be in the best interests of the society as a whole, it will certainly not benefit the small number of fat-cats who are busy lining their wallets with the future economic safety of the country as a whole.

Sunday Jones believes in hope, and that you will always find it somewhere.

The Great Orlando believes in the magic of the dove...