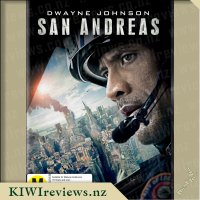 After the infamous San Andreas Fault gives, triggering a magnitude 9-plus earthquake in California, a search and rescue helicopter pilot (Dwayne Johnson) and his estranged wife (Carla Gugino) make their way together from Los Angeles to San Francisco to save their only daughter. But their treacherous journey north is only the beginning. And when they think the worst may be over... it's just getting started.

I expected so much from this movie, special effects, some sort of a story but instead I found a story I have practically seen before, the special effects at times where very mediocre and the acting was rather average. Even before we put the movie on, both my husband and I guessed the plot and we where practically on the money. Nothing was really surprising and the deaths where extremely predicatable, just meeting the new characters you could tell beforehand if they where going to make it or not. It was just average.

The only part I found mildly interesting was conquiring the Tsunami. Although, the share magnitude of it was smashed as soon as more obstacles where thrown into the equation and then it just got silly. I hated how it was one problem up against another the whole time. But of course the victors walked out of it pretty much unscathed.

I do like The Rock (Dwayne Johnson) but his character was too macho for my liking, nothing really fazed him and he could tackle any problem head first with out concern. Always at the right place at the right time. He showed a hint of emotion when it came to his daughter but mainly he was there to save the day as no one else was capable of doing it. Any hint of realism went out the window within the first five minutes when he saved the day, as no one else in his team was capable of pulling the girl to freedom or saving his wife from the collapsing building.

Luckily, I have not had to endure a serious earthquake before and so I am hoping this movie is a complete fabrication of the truth especially when practically every building collapses or implodes. The special effects where on over drive and as I said earlier not always on point.

As usual a scientist works out the disaster is about to occur right before the event and tens of thousands of people are saved because of it. It has been done before. Just once I would like to see a happily married family with school age children who is just your normal Joe Blog survive and save the day without over doing everything, instead of your predicatable newly serperated couple who has a child about to move towns for college and the father has to save everyone.

If you like your 'end of the world' 'catastrophe at the top of the scale - human race will forever be changed because of it "movies" you will enjoy this but if you want a hint of reality than keep walking. A great movie to just blob to but if you are in a thinking mind then pass.

All "end of the world" movies follow a basic plan, a marriage separated or in turmoil, a child separated from their family, a quest to reunite and sometimes even a romance thrown in because what's a kiss without the world falling apart around you? San Andreas covers this all, the helicopter pilot who sweeps in to rescue his ex and they head off to find their daughter who is trying to survive with the new friends she has made.

We get into the action really quickly with a rescue needed right from the start, just to show us what our main guy can do. Soon enough though the movie is in full swing and there are earthquakes coming out of everywhere! None of the characters really stood out though there will be one particular character you can't help but hope karma catches up with, but they were all such generic characters that I can only remember the names of a third of them. All the extras though pretty much did a good job, I wonder how many of them ended up with sore throats though...

The plot was decent enough, though when describing what the film was about to my husband I said it was basically '2012 but earthquakes only' and that was pretty much on the nose. The character I cared the most about we saw the least of, which was sad but pretty typical of these movies for me. Whilst this wasn't anything new the plot still moved along well enough that I paid attention to it and my husband was barely on his tablet for a change. The special features only gives us some deleted scenes and they're all scenes that were right to be on the cutting floor, adding nothing to the film.

Now, the special effects, something that's always necessary in a film like this for pretty obvious reasons. Some of the ripple effects on the land were wonderfully done and I thought that looked particularly cool and I didn't have any moments where I didn't feel like any of the effects of the earthquake was plasticy or fake. The soundtrack fitted in well with the scenes as needed and added to the overall drama of the movie well.

I rather enjoyed it, whilst it doesn't stand out in its genre, it has gone on to prove that I like earthquake disaster films more than volcano ones and I know that my disaster movie loving mother will enjoy this for sure.

The fun and lovable gang, The Jungle Bunch are all set to leap from television to their full length feature! This ragtag and mismatched group of unlikely heroes, led by Maurice, the Great Tiger-stripped penguin warrior, is set to face their biggest challenge ever.

When life in the jungle is threatened by the evil Koala, Igor and his mercenary monkeys, The Jungle Bunch teams up with their mentors, The Champions to counter his dastardly master plan.