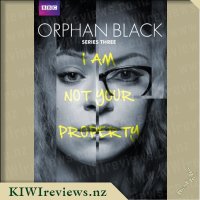 The multi-award-winning hit show returns for an electrifying third series that introduces a dangerous new threat to the 'clone club' sisterhood.

Just as Sarah and her clone sisters were beginning to piece together the complex conspiracy behind the shadowy Dyad Institute, the discovery of Project Castor - a top-secret military project producing highly trained male clones - throws their lives back into turmoil. Watched over by the ruthless matriarch Dr Coady, the Castor clones are focused, lethal soldiers. But who created them? And, more importantly, why?

Sarah's Ukrainian twin Helena is languishing in a Castor cell, feeling abandoned by the family she only recently reconciled with. So when Sarah decides to track her down, the Castor clones must brace themselves for a fierce battle. Meanwhile, Alison has begun a lucrative but shady new line of business, and Cosima has discovered the key to the synthetic sequences that could keep all of them alive...

I have been an avid viewer of Orphan Black. I stumbled upon it by accident, and was not aware it what it was, or more importantly that it was Science Fiction. I have recommended this show to so many over the past 10 months, and when someone asks what it is about, I ask them just to watch. If I had known it was Sci-Fi, I wouldn't have watched it - but now I'd an addict, an Orphan Black, Science Fiction addict.

Going beyond the second series of a show can be a let down; story lines can get tired and dragged out. The second series left a lot of questions still needing to be answered, and the revelation of the male clones and their story was starting to develop. The story line centers around Sarah who in Season One finds out she is a clone, and has a gaggle of clone sisters. There are layers upon layers of story lines, that involve different groups such as Dyad, Leda, Castor, the Proletheans, and the Neoloutionists. Sarah fights these, all to keep her daughter, herself and her sisters safe.

Tatiana Maslany, who plays Sarah and all her clones, is an outstanding actress, and does not disappoint in Season Three. She plays a wide range of characters, all very distinct and different. In Season Three Cosima and Helena get more screen time and Sarah is less dominant than previously. The story line develops and the relationship with her daughter always makes my heart pump. The final episode, although I won't reveal what it is, does not disappoint. I think what makes Orphan Black so successful is how it interlinks real life emotions, with fictional propositions and ideologies.

There are many laughs throughout the show especially Sarah's clone sister Alison, and her 'desperate housewives' kind of mantra. I really like that she gets to shine more in this season. She provides a much needed comic relief to the show. Delphine's character was the most surprising this season, where we see a very different, evil side.

Overall, the acting is top notch, at times the setting was a bit boring, however the 'need to know' that develops from watching Seasons One and Two kept me hooked. I am looking forward to Season Four. It is a must watch series for everyone. I am yet to meet someone that didn't enjoy it, even to their surprise!

Auckland Museum in association with Beca is proud to present this significant international exhibition displaying 50 models of Leonardo da Vinci's famous machines, each constructed by Florentine artisans and based on Leonardo's famous codices.

To satisfy the world wide interest in Leonardo da Vinci and his creative process, the Florentine artisans of the Niccolai family from Teknoart have spent the last half century studying the ... more...