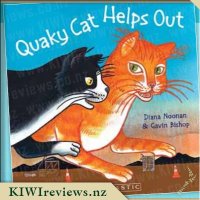 It has been five years since the first big Christchurch earthquake, but some of Tiger's friends still have broken homes or none at all. Kind hearted Tiger rounds them all up for a gathering of friends.

Mr Birdsnest and the House Next Door
Rating: 10.0

We were lucky enough to be selected to review Quaky Cat Helps Out. First impression was wow, I love the illustrations on the front cover. I then read the back and learnt the book was written in memory of the Canterbury earthquakes of 2010 and 2011. It's nice to have a book based around such a massive, tragic event in new zealanders history.

I loved reading this book, the sentences all rhyme and it is a very easy read. The illustrations on each page are well done, and appealing to a young audience. The storyline is around a cat whose home was battered and broken in the Canterbury earthquakes but it's now nice and mended, so he lays awake at night worrying about his cat friends who aren't so lucky and their houses are still broken with nowhere to go. So he goes out at night and invites all his cat friends over so they have a warm place to curl up and cuddle.

I love the compassion this story shows, and it is based on a true story - people are still left with broken and battered houses in Canterbury with nowhere to go. This book sends out a nice message to young readers especially in the Canterbury region who were/and still are affected by the big quakes. It's nice reading a few short sentences from children aged 9 to 11 in the back of the book who were personally affected by the Canterbury quakes and it feels like this book has help them overcome some of their fears and made them realise they are not alone.

I would be happy to pay $19.00 for this lovely book, and all author royalties from the sales of this book will go to supporting the work of Orphans Aid International. A New Zealand charity that was there in the aftermath of the big Canterbury earthquakes to help.

I haven't had the opportunity yet to read Quaky Cat, however it is a title which it well known throughout New Zealand. I was pretty excited when I got the opportunity to read and review Quaky Cat Helps Out.

The text is written in rhyme and has good rhythm and is easy to read. Mr five sat down to read it as soon as I brought it home! It was lovely to see that he recognised Quaky Cat as he had read it at school. He was extremely interested in reading the next book in the series.

The various cats in the book show how a variety of people or families would have been living (and will still be living) after the quakes. When people read the book, they are likely to relate to how their own friends and family might have experienced the aftermath. Like the cats, some of them will be living with fears of going into certain buildings, leaving their homes etc.

Tiger (Quaky Cat) gives some hope to the cats who are homeless and fearful after the quakes. Just like the real people who would have gone through the quakes, the cats needed some love and care to get through the whole ordeal.

The illustrations are beautifully done. The colour scheme is very simple and gives a sense of disaster and sadness. The eyes on the various cats make me think of how children would have felt during and after the quakes. The look of shock and fear is portrayed. The illustration of the Cathedral is particularly meaningful to me as I stood in front of it years ago, pre quake and then again a couple of years after the quakes. It is quite sad and for me (and a lot of kiwis), that image is one which will stay in our minds forever.

I think that it is a lovely gesture for the authors to donate all royalties from the book to the Orphans Aid International. It states at the front of the book that this charity supported the people of Canterbury after the 2011 earthquake in Christchurch. The earthquakes were a major event in New Zealand's recent history and had an impact on all New Zealanders (as well those abroad). I think that this book will touch everyone who reads it and each person will have a different emotional reaction depending on what their own experiences of the earthquake were. The quotes at the back of the book are from children ranging from 9 to 11 and it goes to show that the book touched them and helped them in their recovery after the quakes.

Quaky Cat Helps Out is the story of a ginger tabby called Tiger. He is called "Quaky Cat" because he lives in Christchurch and experienced the terrible earthquakes that rocked the city, but he was luckier than most - his house was damaged but was repaired and now he lives in comfort in a nice neat street where everything appears to be back to normal. What makes Tiger special, however, is that he recognises how lucky he is and how hard things have been for other cats who have suffered trauma, losing their homes along with their human families, and existing now in makeshift accommodation like caravans or even out on the street, seeking shelter where they can find it.

Children who experienced the quakes and the aftermath will relate to Tiger's friends who are afraid to go into buildings even though they have been certified as safe, or are afraid to leave their damaged homes because something terrible might happen. Tiger helps his friends by inviting them all to his house and making sure they feel safe there. His human friend, Emma, is so impressed when she sees all the visiting cats relaxing and enjoying themselves with Tiger that she joins in: she and Tiger give up their comfortable beds and sleep on the floor so that some of the visitors can enjoy a real bed once again.

I think all young children should read this book. For children who live in Christchurch, it is affirming to read about the cat "with a heart... a kind cat who cares". There is a certain comfort in seeing that cats, as well as people, can support each other in times of difficulty. And for the lucky children who have never had the experience of losing their homes or living through the uncertainty of constant after-shocks, it is a way of learning about what others, both people and animals, have had to put up with - an event that is now part of New Zealand's history.

My five-year-old grandson was able to read the book on his own, and was able to explain the book's message to me when I asked him what he thought of it. His response was, "I like Quaky Cat because he let other cats go in his house, not just leave them on the side of the road." That sums up the book's message perfectly!

A terrible flu is sweeping through Arg's valley, causing all sorts of snotty problems for Arg and his tribe.

But there's soon a much bigger problem to deal with, when Arg discovers people flu can be deadly to dinosaurs. If it reaches the secret valley, the dinosaurs are doomed!

Saving the dinosaurs from people flu will send Arg and Skeet off on their snottiest adventure yet.