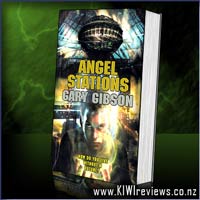 Aeons ago, a super-scientific culture known as 'Angels' had left incomprehensible relics all over the galaxy. Among these phenomena were the Stations, whereby human spacecraft could jump instantly from one part of the galaxy to another. And from them the brilliant Angel technology could be explored and exploited.

One of these stations orbits the planet Kaspar, where the only other known sentient species outside Earth has been meticulously allowed to continue evolving in its own world of primitive ignorance. But suddenly Kaspar's mysterious 'Citadel' has become the vital key to repelling the fast-approaching threat. At what cost, though, to its native inhabitants...and to the human residents of the orbiting Angel station?

This book has some very interesting concepts in it, most of which will confuse any but the hardest Sci-Fi nut... especially if you are easy on the Sci, and more into the Fi. However, for those of us who enjoy dealing with Quantum Superposition, Collapsing Parallel Worldlines, and Null Dimensional Topology... this is a real winner.

But don't let that put you off if you really enjoy a good tale, because this book is still that in spades. The Heavy-Sci just helps to understand the underlying abilities of the main characters.

The future is a sea of parallel possibles, and according to Quantum Physics, when the 'possibles' are observed, they collapse into a 'definite'... think of it this way... if you flip a coin into the air, and catch it in a box and seal the box before you actually look at the coin... is it heads or tails? You don't know, so it could be either... Quantum Physics theory dictates that the coin is in a state of Flux, where it is both heads AND tails, until it is observed, and thus becomes one or the other. Now, what if you could peek ahead in time, to 'see' the coin at the future time you open the box... you would know before you even flipped it which way up it would land. So, you flip the coin, catch it in the box, open the box and sure enough, it's heads... Q/P says that you did not actually see the future, you MADE the future, by the act of observing the coin in advance. You looked ahead into the sea of 'maybes' and predefined the upcoming events, in effect locking one particular future in place ahead of time.

Still with me? Good... because that was the hard bit. Now imagine someone with the ability to look ahead, way ahead, and predetermine the entire future for the next few hundred years... what free-will is left? What mystery remains? What if they were having a bad day, and it caused the future to collapse into that of a devastated world, full of alien plague, pollution at record levels, entire continents wiped bare of human life?

What if that's already happened?

That is the world you walk into when you open this book. A world where religious fanatics have taken alien technology discovered in the outskirts of our solar system, and used it to create superbeings with the ability to foresee the future, thus locking it in place, unalterable and terrible in it's scope, the ability to project their consciousness out beyond the stars to planets we can only dream of, to see and hear and interact with another alien race, with a terrible plan in mind that could spell the end for both species.

And as if that isn't enough, there's an event coming that will erase all higher-order life from the galaxy as we know it. Anything more advanced than a snail will get it's brain cooked, and there's no way to stop it...

Overall, I found this story to be another wonderful addition to the library. Well past the point where most stories have given you all the key points and are now focussing on the dramas, this tale drip-feeds you key elements that force you to continually revise your mental map of what's going on... this keeps you fully immersed in the plot right to the last page. It takes contemporary ideas of hi-energy physics, current paradigms of theory on the nature of 'Reality', and some great storytelling, and wraps them up in a stunning debut publication. If this is the calibre of Gary's abilities, I anticipate some great stories coming down the track from him.

Mother-of-five Jas McPhee started her 'How to Feed a Family of 6 for Under $20' Facebook page after cooking a simple lamb curry one night that her children devoured. It cost less than the price of one takeaway meal. Since then she's shared daily instalments of delicious recipes costing less than $20 and has attracted tens of thousands of Facebook followers.

This cookbook brings together Jas's most popular recipes ... more...