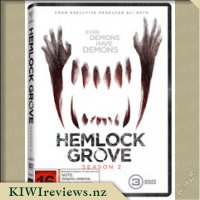 One cannot quench his all-consuming thirst. The other cannot tame the beast clawing its way out. In the sleepy Pennsylvania village of Hemlock Grove, two young men struggle to accept painful truths: about family, themselves, the mystery of the White Tower - and a terrifying new threat so powerful it will turn them from predators into prey.

I watched season two fresh off the boat having literally just finished season one, which works out well review wise as had this not been mandatory I would never have finished the first season at all. Season one left us with some pretty big changes as far as the characters went and so I was interested to see where it would go from there and if the show could be improved at all, and, well.... it did improve, even if only slightly. Season two fixes enough of the past issues to make this a slightly more enjoyable show.

We have all the main cast return and Roman gets a good showing in this series, gone is the irritating, full of himself young man and instead we still get a young egotistical man but we do have him battling with himself a lot more as he tries to work himself out, Peter is also great but the subplot involving his mother just doesn't fit with the overall show, even if it does give us a few neat moments. A few of the other main characters spend most of their time having you wonder just what the heck they are needed for and one can only hope that the next and final series gives us an answer to that.

Another big iffy is that they bring back a big baddie from the first season and then dispatch them so quickly that it didn't make sense at all to bring them back for such a short time. I did enjoy this season a little more than the previous one though it's not a show that I would have felt bad about not ever seeing. I am, however, still interested to see how everything wraps up next season and so will admit that I liked it just enough that I will watch season three when it airs.

Superstar disc-jockey Juan Vesuvius brings his turntables to Auckland to deliver the greatest and strangest DJ set you've ever experienced.

Explore the history of dance music with a bona fide musical legend. But why does he need so much towelling? And what really happened between him and David Guetta? Vesuvius is an eruption that cannot be plugged.

The hit show of the 2017 Edinburgh Fringe arrives in Auckland this May ... more...