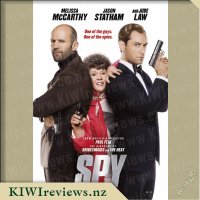 Five minutes into the movie I paused it and called out what would happen, not surprisingly at all I pretty much guessed the plot from the start except for one small error. Totally predictable with no real surprises anywhere except for maybe Jason Statham as he was just so funny and what he said was hilarious totally unbelievable but great neither the less. If he was not in the movie I am not sure who would of carried it. He added all the humour to it and had the only real worth while scenes.

The language I don't think was totally necessary but I guess it worked for this particular style of movie. A lot was over the top and did not add much value to the scenes but could be over looked. It jumped around a bit and the special effects were at times rather average.

Melissa McCarthy character as expected improved socially as the movie went on but anyone could of honestly played the role and I found she did very little to add to the mix. Jude Law was charasmastic and rather average if it wasn't for his flirting skills and egotism you could easily have forgotten he was even in the movie. I did enjoy Aldo and was left wandering who was the real actor. The rest of the cast just done their jobs.

Its not that it is a bad movie its just an average movie with nothing really new brought into the mix. It could of been so much more and had the potential to be that but just didn't reach it. I think Jason needed more screen time as I just loved him and his bad attitude. Just a so so movie that I won't be in a rush to see again. This is a film that my flatmate loved. He raved about how hilarious it was, and quotes Jason Statham's character at every opportunity. So I finally watched the film, so as to understand what he kept going on about.

'Spy' is pretty much a secret agent parody film. Though the style of comedy is more suited to a late-twenties to middle-aged audience, compared to 'Kingsman: The Secret Service' which seems more targeted at the teenage group. There were definitely parts to 'Spy' that I enjoyed, but it felt far too predictable to really hit my funny bone. It may be that I have outgrown the style of comedy that Adam Sandler and Kevin James are known for, and yet this is the exact style of comedy that I find from Melissa McCarthy and Miranda Hart; self demoralising humour, combined with toilet jokes. Jason Statham came out better off, with the rather well done "serious but potentially insane" character of Rick Ford.

I did like the whole overcoming prejudices vibe that I got from the film, but in all seriousness, I just didn't enjoy the female leads. The film felt slow and lazy, despite the fight scenes, concerts, and gun play. If Adam Sandler is your style of comedy, and you enjoy knowing exactly what will happen in a film, then you may enjoy this. But I definitely disagree with my flatmate. Apart from Jason Statham, this film had nothing that appealed to me

A young married couple's lives are thrown into a harrowing tailspin when an acquaintance from the husband's past brings mysterious gifts and a horrifying secret to light after more than 20 years.