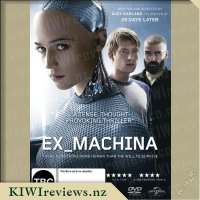 A young coder at the world's largest internet company, wins a competition to spend a week at a private retreat belonging to the reclusive CEO of the company. One arrival he learns that he must participate in a bizarre experiment which involves interacting with the world's first true artificial intelligence, which comes in the form of a beautiful female robot. This is quite a peculiar film. With the large number of AI (artificial intelligence) films that have been released recently (eg. Avengers: Age of Ultron, The Machine, Chappie, Terminator Genisys, Transcendence), the market is rather saturated with a wide variety of AI directions. This movie follows the philosophical implications of attempting to create a mind capable of true independent thought.

This is a rather layered film that works quite well considering the very limited cast. The casting of Oscar Isaac in this film is both great and odd. Right out of the gate, his character is so clearly something perverse, veiled, and you get an instant uncomfortable feeling. The entire film becomes a series of unfortunate and awkward conversations with three people all trying to interact with each other independently. Domhnall Gleeson does his role well, in general he played a stereotypical character, but over time his character develops and becomes ever so more anxious and concerned.

The film in general starts off pretty predictably, but takes a twisted turn, and eventually leaves you questioning your own idea of morals and ethics. Really it is a brilliant film with respects to analytical thinking. It takes a concept such as human rights, something that we think that we have set ideas of what is right and wrong, and then calls into question not the definition of human rights, but the definition of human.

But it was an uneasy film to watch, something just didn't feel right. I didn't feel in control. It was odd for a mainstream film to evoke such an emotion. Definitely a movie to watch.

A compelling psychological thriller, Berlin Syndrome follows Clare, an Australian photojournalist alone and adrift in Berlin. One afternoon she meets Andi, a charismatic local. There is an instant attraction between them and a night of passion follows. But what initially appears to be the start of a romance take a sinister turn when Clare wakes up the following morning to discover Andi has left for work and locked her in his apartment. An easy ... more...