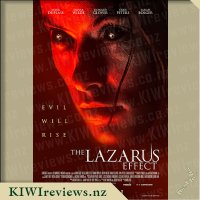 Disclosure StatementFULL DISCLOSURE: A number of units of this product have, at some time, been supplied to KIWIreviews by the company for the purposes of unbiased, independent reviews. No fee was accepted by KIWIreviews or the reviewers themselves - these are genuine, unpaid consumer reviews.
Available:
12 August 2015 The blurb does a very good job at explaining the first half of the film, and is largely predictable. So while watching this film, all that you are left to ponder is whether this "evil" will be cured, killed, or escape. Despite the rather limited plot, cast, and environments, the writers still managed to fit in an interesting subplot, in the form of recurring nightmares; Zoe reliving a "traumatic" childhood memory. I use those quotation marks for a reason, but I'm not so cruel as to spoil the only really interesting revelation in the film. You know it must be relevant, but it isn't revealed until the end.

When I mention it is predictable, it is not just the major plot direction that is predictable. A lot of the camerawork lacked subtlety, and lingers and places unnecessary emphasis on "crucial" moments, to apparently allow every single person in existence to be able to see what is going to happen before it happens, effectively ruining any shock or surprise at the events that occur.

Really, it was the first half of the film that held the most tension, with the dog that was experimented on. It had a feeling similar to that of 'Paranormal Activity', where violence is implied, and unseen action leaves you more nervous than actually being face to face with the beast. But beyond the dog and the nightmares, there was little that I really enjoyed about the film. I normally love anything with Olivia Wilde, (not-so-secret-crush) but she added nothing to this film, and really nobody likes to watch a one-sided fight.

If you want a horror to watch at night with some friends, this would be a reasonable choice. But while it had some tension in the first half, it lacked any real fright factor.

When John Connor (Jason Clarke), leader of the human resistance against Skynet, sends Kyle Reese (Jai Courtney) back to 1984 to protect his mother, Sarah (Emilia Clarke), from a Terminator assassin, an unexpected turn of events creates an altered timeline. Instead of a scared waitress, Sarah is a skilled fighter and has a Terminator guardian (Arnold Schwarzenegger) by her side. Faced with unlikely allies and dangerous new enemies, Reese sets out on an unexpected new mission: reset the future.