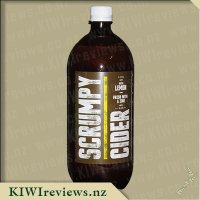 Back in the day a few thirst Englishmen got into the habit of raiding orchards for fruit to brew their cider. The sneaky buggers called their missions "Scrumping" and the resulting drop "Scrumpy".

Today we don't nick the fruit, but the spirit and passion of scrumping still lives on.

I was completely surprised by how delicious this drink is. I am not normally a cider drinker - I prefer dark beers - and I don't especially like most wines either. I had not tried cider since my university days. This was an eye-opener and I thoroughly enjoyed the experience. The fresh flavour certainly impressed me.

We served it chilled as it was an extremely hot day, and a warm cider would not have gone down well. The first impression was one of pleasant, soothing liquid cooling our dry throats. Despite the presence of lemon there did not appear to be any significant acidity or bitterness, and although the drink was not actually sugary, it did strike a nice balance between sweet and slightly tart. The lemon blended nicely with the cider base without overpowering it.

I thought I detected a trace of ginger among the apple and lemon flavours; unfortunately, the ingredients are not listed on the bottle, and the website did not have any details either. This is a pity as I like to know what I am eating and drinking, and, although I am personally not allergic to any common foodstuffs, there are some people who are and who need to know what they are buying. For myself, I am just curious!

Having finished half the bottle, we decided to use the other half in the meal we had planned for the evening. This was to be a shoulder of pork braised in its own juices, complemented by some crystallised ginger and some garlic. The addition of the remaining half bottle completed the recipe. After three hours of slow cooking, a superb meal resulted. Clearly this cider is very versatile. The lemon flavour came out in the meal, but was not so strong that it masked the flavour of the ginger and garlic.

The biggest bonus with the meal was that the lemon flavour cut across the richness of the pork and, in combination with the garlic and crystallised ginger, made it pleasantly different and, I suspect, much more digestible. The cider, too, would have assisted in tenderising a lean cut of meat to the point that its texture was not too chewy.

I think I have discovered a new favourite summer drink, and one which I will certainly buy again. I actually saw the range for sale in my supermarket yesterday so I know where to go to for a top-up! Thank you, Harvest Cidery and KIWIreviews, for introducing me to yet another excellent product.

We are pretty big cider consumers in our household, and Scrumpy style is one of those winners with us. So it didn't take much arm twisting to apply for a bottle. My husband and I sat down to a glass of this chilled to celebrate the end of the week. We had a glass each. He was not particularly impressed with the flavour and didn't want any more of the bottle after he finished the first glass.

I personally found the flavour okay. But here's the thing. The taste of this made me think of my university days. Those nights with friends when I was drinking RTD that was big in the late 90s. This cider tasted exactly like a lemon RTD. It's sour and a bit bitter, and it's alcoholic. It does the trick if you want to get a nice buzz after a hard day at work. However, if you were looking for cider I think it misses the mark. It just doesn't taste like a cider.

That said, I went on to create a nice pork and cider dinner last night. I rubbed my pork chops with oil and some Simon Gault Flavours of New Zealand, then around the pork chops I added chunks of onion and apple, a bit of Dijon mustard and a healthy slug of this Lemon Scrumpy. The flavour of the lemon came through nicely in the meat and it was really enjoyable.

While I don't think this was a good cider, I did think it was a passable drink. I think it would be nice with ice at a summer BBQ. It definitely worked as a meal additive as well. But if you were looking for a cider, I would suggest trying another cider in the Harvest range.

This is a rather split personality beverage; it has both the lemon flavour, mixed with a rather tart, yet bitter cider flavour. To be honest, the cider flavour almost tastes like beer at some points. But that is really what this beverage provides. A cheap cider available in a large volume.

The lemon flavouring is a bit of an improvement to the general scrumpy flavour, but it seems rather separated, with the lemon and cider not really being a part of the same mouthful. The separation honestly is quite odd.

As with most beverages from the harvest brewery, it is best to allow it to warm up slightly towards room temperature, as there is a large level of carbonation, and messes are easily made if it is poured straight after removing it from the fridge. The overall volume of beverage means that there is a general high level of value foe money, due to quantity over price, but the flavour itself is not altogether appealing.

While the lemon flavour has a similar feel to drinking that of a ginger beer, the alcoholic content of the drink leaves a lot chance and it largely doesn't pay off. While it provides an alternative to original Scrumpy, it isn't really something I'd aim to buy from the shops. I'd certainly drink it if it had been purchased, but I wouldn't go out of ,y way to purchase it.

I got into enjoying cider thanks to my wife and when I saw this up for review I thought it would be great to give this cider a try.

My first thought for this would be to try this in a cheesecake. I soaked the biscuits for the base in some of the cider before pushing it into the base and with the filling I added more of this cider to it, I wanted a good lemon kick, with a little bit of lemon zest on top I left it to chill. While, unfortunately, the cheesecake didn't set well however that didn't detract from the taste and it was a wonderfully lemon cheesecake with the ability to make me a tiny bit tipsy (when joined with glass of the cider on the side).

I do have to say though, that I don't like this on its own and I only managed to finish one glass of it, I just didn't like the taste and found it to be too tart for my liking, this isn't something that I would buy if I saw it on the shelf. My mother in law had some and really loved it and asked for more. My wife has since been slowly finishing off the bottle and enjoying it and the bottle has been emptied.

This isn't a cider that would be my first or last choice but I know it will be sitting in the fridge again as it means my wife has something all to herself.

After a huge emotionally draining week, my husband and I just wanted to sit back and watch a non thinking movie with a nice drink. My husband pulled out the Scrumpy Cider with Lemon for the both of us. First of all I have to say the smell is extremely over powering. You can smell the lemon even before it hits your lips. This is not like you have a glass of cider and you put a twist of lemon with it - its like you are in a field of lemons and they are everywhere. It just completely wraps you up in that smell.

There are four distinct lemon tastes with this drink. The first is the smell which takes your senses to another level, the second is when it hits your mouth, then when you swallow you get another taste of explosion followed by the lemon after taste. This would definitely appeal to someone that does not like the taste of Scrumpy and instead just likes lemons or because of the 8.2% alcohol level you want to get drunk and you love Lemons. This drink completely hides the taste of the cider and you are just left with the lemon.

I personally did not mind the taste I was just over come with that smell and it was just too strong for me. This is not something I would drink on a regular occasion and my husband felt the same way. Just too overpowering with lemon. Seriously though A+ for the lemon taste.

Save money and the environment by purchasing SodaStream SodaMix delicious flavoured syrups. Each bottle makes the equivalent of 33 cans of soda or 48 servings - which results in less bottles and cans being recycled. Further, as Sodastream drink making systems require no batteries or electricity, they are eco-friendly and portable.