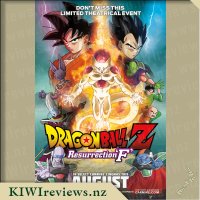 Hot on the heels of last year's summer blockbuster, Battle of Gods, Dragon Ball Z is back in theaters. Dragon Ball Z: Resurrection 'F' is the second film personally supervised by the series creator himself, Akira Toriyama. The new movie showcases the return of Frieza - one of the most iconic villains of all time. Even the complete obliteration of his physical form can't stop the galaxy's most evil overlord. After years in spiritual purgatory, Frieza has been resurrected and plans to take his revenge on the Z-Fighters of Earth. Facing off against Frieza's powerful new form, and his army of 1,000 soldiers, Goku and Vegeta must reach new levels of strength in order to protect Earth from their vengeful nemesis. The Dragon Ball Z fanbase is certainly coming out in full force, with the latest film having a limited theatrical release in not only independent film cinemas, but also in the mainstream theatres such as Hoyts. I was definitely excited to see this film so I booked my viewing the day that preorders became available.

The opening scene was originally a tad confusing. I thought perhaps I'd walked into a Pokemon movie, or children's film, but my concerns were soon put to rest as it was explained to be the villain's version of hell. It got a few laughs. This film gets straight into the action, with the long time foe brought back to reality within the first ten minutes, and everyone is brought up to speed.

One of the issues that had become apparent in the later episodes of Dragon Ball Z, was that the enemies were getting too strong. All capable of destroying the Earth, and the Z fighters were becoming useless (with the exception of Goku, Vegeta, and maybe Gohan). So this film provided something that was desperately needed; mid-powered enemies. We finally got to see some good fights from the old fighters that hadn't had a fair chance in a long long time. With Goku returning from training, we get that ultimate battle that we always wanted, and we got some character development, as well as new power levels with new hair colours for the Saiyans.

But it was missing many things. For one, my favourite character Vegeta had very little to do with the film beyond standing around looking angry. He never got has chance to get revenge for the destruction of his planet as I had hoped would happen. Secondly, the final battle was rather short. Probably the consequence of having no filler, and only being a short hour and a half film. I would have loved to have seen the battle last longer, and require transitions through the Super Saiyan stages, as the challenge level increased.

The art appeal was good. There was a good combination of old animation looks, with newer, cleaner computer generated effects. But it still had that distinctive Dragon Ball Z look to it. I also loved the soundtrack. It varied from heavy metal to rock, and it fitted in very well with what was going on onscreen.

As a huge fan of dragon ball z I was extremely excited to hear about the announcement of another movie (Resurrection 'F") after the battle of gods. even decided to go watch all of the episodes of both dragon ball and dragon ball z in anticipation. I pre-ordered my tickets the day it was available in fear I would miss out on this limited release!

The start of the movie was confusing to say the least. it seemed like some sort of kids show with fluffy cute animals singing and dancing. thankfully that confusion disappeared when it turns out that Frieza is stuck in his own sort of hell in that world. I have found that Dragon ball Z has always had a good knack at humour and it certainly shows in this movie.

as it all got started it shows the person in charge of friezas force while he has been gone. he decides it is time to resurrect frieza by collecting the dragon balls on earth. it was good to start off the film this way as it really sets the direction it is going for but I found myself wondering what happened to Goku and Vegeta! You soon find out that they are on Beerus' planet training with Weiss.

back on earth you get a very quick glimpse of the support characters but sadly thats about as much as you see of them. Krillin, Gohan, Piccolo, Master Roshi and Bulma are the only ones that actually get any screen time. would have loved to see Goten and Trunks in the mix there, but never mind there is always next time!

as the film goes on, Frieza finally takes on Goku and Vegeta. there are new transformations for all 3 of them which would have been nice to keep as a surprise but this fact was very advertised so became a matter of when will they get there?

over all I enjoyed the movie and found it to be a great addition to the world of Dragon Ball, not awesome but great. I will be buying this on blu-ray once released and look forward to any future installments!

"Happy Feet" is set deep in Antarctica. Into the land of Emperor Penguins, where each needs a heart song to attract a soul mate, a penguin is born who cannot sing. Our hero Mumble, son of Memphis and Norma Jean, is the worst singer in the world... however, as it happens, he is a brilliant tap dancer!