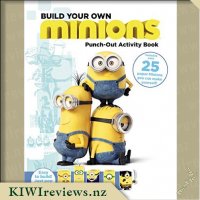 The story of Universal Pictures and Illumination Entertainment's Minions begins at the dawn of time. Starting as single-celled yellow organisms, Minions evolve through the ages, perpetually serving the most despicable of masters. Continuously unsuccessful at keeping these masters-from T. rex to Napoleon-the Minions find themselves without someone to serve and fall into a deep depression.

But one Minion named Kevin has a plan, and he-alongside teenage rebel Stuart and lovable little Bob-ventures out into the world to find a new evil boss for his brethren to follow.

The trio embarks upon a thrilling journey that ultimately leads them to their next potential master, Scarlet Overkill (Academy Award ® winner Sandra Bullock), the world's first-ever female super-villain. They travel from frigid Antarctica to 1960s New York City, ending in mod London, where they must face their biggest challenge to date: saving all of Minionkind...from annihilation.

Featuring a soundtrack of hit music from the '60s that still permeates our culture today, Minions is produced by Illumination's Chris Meledandri and Janet Healy, and is directed by Pierre Coffin and Kyle Balda. Brian Lynch has written the screenplay for the 3D-CG comedy adventure, and Chris Renaud serves as executive producer of the film.

A paper craft book inspired by the new feature film!

When I received my KIWIreviews package this time there was something in their for everyone. My eldest took ownership of the Shopkins book where as my youngest grabbed this and told everyone 'under no uncertain terms this book was hers and hers alone and no one was allowed to play with it unless they asked her permission first' and stomped out of the room and disappeared to study in silence. I was not allowed to touch this until she went to preschool. My first thought was this is pretty cool.

The start of the book has instructions on how to construct the minions and I figured that I did not require these - I was soooooo wrong. Now to be fair my husband is the artistic one in our household, followed by the girls and then coming up the rear its me. I decided that I was going to make these yellow square objects so quickly. My husband was making dinner and I (under instruction from Miss 3) I got to build one. I was rather impressed with myself and after nearly half an hour I had an one eyed minion sitting before me, that was until my husband pointed out I had done it wrong and all the tabs where out and showing. After he smirked his way through it and fixed my blunders my daughter was extactic. I then vowed that I would build another perfectly and I did.

The makers of the book have thought of everything. The minions pop out so easily you just run your fingers along the seams and they come out. It is labled with where the inserts go - but for some reason I always get my eyes and arms around the wrong way even though it is plain as daylight. Actually I am now rather a pro at the construction except with Bob I find he is rather smaller and sometimes pushing the box together can be a tad difficult but I get there in the end.

My daughter has spent hours playing with it, either alone or when the occasion arises with her elder sister. It has backgrounds throughout the book so you can play different scenerios. When I asked her what one was her favourite she said the 'invisible minion' rather confused I asked her to show me this one and instead it turned out to be the Egyptian one. She can now also (very slowly) take the minions out of the book and helps me build them.

I also like with the book once you have ripped it out from the page you can then take the page out and throw in the recycling so the book does not look messy. They are stories/backgrounds on the various minions and a couple of puzzles. Really is a fantastic book. My only criticism would be I would of liked the minions name on each of the pages as I am not as clued up as the girls. Close to the front it tells you what each looks like but I feel it would of been easier if they are on the page besides that think its great.

Who doesn't want their own army of those loveable little yellow goofballs? I know I do! I would die a happy man if I had a clan of loyal-to-a-fault - very faulty in some cases - Minions. And while the movie introduced a few contradictions into the Minionverse, this books doesn't even pretend to address them. Instead, it offers you 25 pop-out fold-up Minions of your very own.

Now, to be fair, I grew up doing origami, model building and quite a bit of papercraft, so I instantly 'got' how they would go together and how to fold them to get the cleanest, sharpest results. And while there are diagrams and instructions in the front of the book, they were a little confusing for Mr7. His handiwork resulted in lots of flaps sticking out instead of being folded in, but in fairness, even though he couldn't wrap his head around the diagrams, he did make some tolerable Minions all by himself.

With some care, I was able to unfold them all, and walk him through folding them together properly, and the results are shown in the photo above - even with being folded incorrectly, unfolded, and refolded, they still look pretty good. That's the hallmark of an excellent design, so huge kudos to Brandon for his great work! Special kudos for the clever design of the pirate's hat!

The die-cutting is top notch, resulting in seams that torn easily in most cases, and only required a bit of delicate adult assistance on the smaller items, such as legs and arms, where the piece needed was long and narrow, raising the odds of a catastrophic amputation mid-pop-out.

The only area that proved a tad problematic was the attachment of the eye strap. Unlike the rest of the tab/slot pairs, these two tabs were required to slide in 'flat' against the slotted panel. This caused a bit of jamming, as the angle of approach didn't cause the slot to automatically open part-way. Still, a little careful use of a craft knife to shape the card a little, and it worked out nicely. It was a small hiccup really, but one to keep an eye out for.

Overall, a great book, and at less than $1 per Minion, it's an affordable way to build your first army of banana-loving lunatics.

Flash is in trouble again! Life outside the fence just looks so much more exciting . . .The adorable wee dog from the bestselling Bad Dog Flash is back in another adventure. Excursions beyond the yard are very enticing for a young puppy.

He just can't help himself!