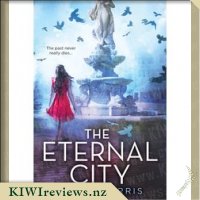 From master of suspense Paula Morris comes a tale of gods and goddesses, thrilling romance, and mystery set in present-day Rome.

Laura Martin is visiting Rome on a class trip, and she's entranced by the majestic Colosseum, the Trevi Fountain, the Pantheon... Everything in this city seems magical.

That is, until the magic seems to turn very dark.

Suddenly, statues of Cupid and ancient works of art come to life before her eyes. Earthquakes rumble and a cloud of ash forms in the sky. A dark-eyed boy with wings on his heels appears and gives her a message. Laura soon realizes she is at the center of a brewing battle - a battle between the gods and goddesses, one that will shake modern-day Rome to its core.

Only she and her group of friends can truly unravel the mystery behind what is happening. As tensions mount and secret identities are revealed, Laura must rely on her own inner strength to face up to what may be a fight for her life.

Acclaimed author Paula Morris brings the ancient world to vivid life in this unstoppable tale of friendship, love, and the power of the past.

How I Alienated my Grandma
Rating: 10.0

My 7th form year proved to be a chance to do Classical Studies and Art History. I found that I had a great interest in this area. 'Eternal City' allowed me to reflect back on some of the places and things I learned about in those classes. In addition to this, my husband and I went to Rome as part of our OE - it was one of the 'must visit' places for both of us. A quick glance at the beginning of this book brought back lots of memories of that special trip. I was pretty sure it would be a book that would capture my interest. I was right.

I think that having an existing interest in Rome, art and architecture of ancient times, made this a fun read. I certainly think that the background information I had made it easier to relate to and become part of the story than it would have been if I didn't have that knowledge to fall back on. For someone reading the book without preexisting knowledge, I would recommend having the internet nearby so that places such as the Pantheon, The Column of Trajan and the various fountains (Fontana) can be viewed to give the reader an idea of what sort of structure it is. Imagination goes so far, but with real places, I think it is good to have a visual aide to assist with a deeper understanding. There were some of the words in the book, such as piazza and oculus, which are not words we are familiar with in our day to day language and may require a quick Google search to assist with understanding what they are. I wasn't so familiar with the gods and goddesses of ancient Roman as they didn't interest me as much during my school classes. Having access to the internet allowed get a bit more information about them and to get an idea of what they were perceived to have looked like.

The book is a mix of history, mythical gods, teen relationships and fiction. Laura, the main character has to work out who to trust with happenings that she doesn't really believe or understand herself. She has to make decisions for the greater good, even if she doesn't like them herself. Both of these are experiences that teens have to go through in everyday life, even if they aren't tied up in a crazy adventure like in the book.

As Laura and the group teens moved around Rome in the story, I found myself having flashbacks to the time my husband and I spent in Rome. I found that the parts set in and around the Pantheon and the fountains made me feel like I was there and part of the experience. I enjoyed how my memories, historical places and fiction all joined together to create a worthwhile read for me.

As I read the book I was intrigued as to where the story was going to take me. Was it going to come to a climax of really strange things happening or was it going to prove all in Laura's imagination? There were parts were I just had to keep reading and my heart was beating just a little faster. I was determined to know what would happen. Would Laura and her friends be safe? The characters were what would seem to be relatively normal teens. However, the way the story unfolded, I kept wondering which ones were who they really appeared to be. The story ended with a battle and lots of action. It wasn't until I read the Epilogue that it pulled everything back to a bit of normality and allowed the teens to complete their school experience in Rome.

I really did enjoy reading this book and I think there will be a few other members of my family standing in line to borrow it next! We are all quite interested in Rome and Classical Studies. I think that students who are studying this subject area would enjoy the book also.

Score: 7.9
Product reviews for listing 4283: I Got A Crocodile
Author: Nicola Killen