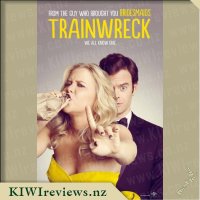 Ever since her father drilled into her head that monogamy isn't realistic, magazine writer Amy (Amy Schumer) has made promiscuity her credo. As much as she enjoys an uninhibited life free of commitment, Amy is really in a rut. While writing a profile about charming and successful sports doctor Aaron Conners (Bill Hader), she finds herself actually falling in love for the first time -- and what's more, Aaron seems to like her too. Amy starts to wonder if it's time to clean up her act.

One of the reasons I was drawn to KIWIreviews was for the movie reviews. I love reading what other people have to say about a movie as it helps me choose what one to actually watch. There was so much talk about this movie before it came out and all the buzz about Amy Schumer I just had to see. I remember one of the articles I read was about Amy's weight and how it was unappropriate for someone of her size to play this role. In the first five minutes of watching it you see Amy wearing next to nothing I was absolutely shocked as there is nothing to her she looks like a normal girl with curves and I found nothing what so ever for her to be ashamed of.

As for the rest of the movie I would hardly call it a comedy more cringe with a couple of palm slaps to the forehead and some very light amusement thrown in. I think I laughed out loud twice and even on those occasions it was not that funny. It was crude, toilet humour and it felt like it was trying to hard in places. Its not a bad movie don't get me wrong but you do not need a PhD in order to watch it and it is extremely predictable. Without giving anything away girl meets boy, boy falls in love they have a fight then they get back together - yes it has been done a million times already. But I do have to say the end is so worth sitting through this movie for. I love a cheesy ending and I love music and dancing so it is totally worth seeing just for this.

Actually in saying that, I did find the movie theatre scene with John Cena quite amusing actually all the parts with John were okay to watch, not funny though more cringe with a lot of 'what the' thrown into the mix especially his sex talk. I love the show Fresh off the Boat so when I saw the dad was in it I got excited as I find him so funny but they completely missed the boat with him and hardly gave him and air time which is really sad.

Not the sort of movie I would sit through again, ok might forward to the end and rewatch it but as for the rest of the movie would quite easily pass on. I didn't find any real sexual chemistry between Amy and Bill Hader and I am still at a loss as to how they both fell so hard for each other but either way there is always someone out there for everyone and I guess in this case it was the two of them. Just an alright movie and I don't think it is worth all the hype that it received - much better rom-coms out there.

Going in to this movie, I had no idea what to expect from it, excluding the fact that it was a comedy as I know Amy Schumer and Bill Hader. I went in to it rather blind and with low expectations to say the least as the things I have seen Bill Hader in did nothing for me. I know about Amy Schumer but thought as a comedian it could be terrible acting. I have to say I was pleasantly surprised!

It starts off with Amy and her sister when they where little kids talking to their father about why him and their mother is divorcing. it set up the movie quite nicely to give you a look in to the girls up bringing and it was very funny. it then goes in to the present day where it shows Amy and her promiscuous life style even while dating a big musclie dude (John Cena).

She is a writer for a magazine and is given an assignment he does now want because of how much she hates sports which leads in to how she met Aaron for the 1st time, she has to write a article about him. the relationship starts off a bit rocky but picks up after a few drinks and Amy does what she does best! the interactions between Amy and Aaron are almost always hilarious.

A big part of this is about Amy's father who is in a rest home and shows their rocky relationship that is constantly tested between Amy and her sister. I wont go in to it too much but it was surprising for the feelings it gives you towards the end! in the end it pretty much plays out like any other sort of Romcom but I enjoyed it and would go back to see it again