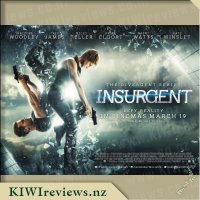 Now on the run from Jeanine (Kate Winslet) and the rest of the power-hungry Erudites, Tris (Shailene Woodley) and Four (Theo James) search for allies and answers in the ruins of Chicago. They must find out what Tris' family sacrificed their lives to protect and why the Erudites will do anything to stop them. Side by side, Tris and Four face one seemingly insurmountable challenge after another, as they unravel the secrets of the past and -- ultimately -- the future of their world.

We rewatched the original Divergent movie the night before and I am glad we did as this movie jumps head first into the story without much of a backwards glance. There are a few flashes from the past but not many and instead has a complete pace change to the first segment. I found this was either so intense your where speeding along like a train with no brakes or you were basically standing still while it prepared itself for the next scene. It just didn't have that same natural flow. The last quarter was great and exciting and had the heart racing but then it just fall flat.

I like when a sequel brings its original cast back and expected more to be introduced to full the gaps but no one really took that position instead it focused basically on Tris and at times Four. It honestly could of finished with this movie but instead there are another two in the mix leading to the conclusion. Currently the third installment is at the movies now and I am not in any rush to see it after seeing this movie. It had the potentinal to be something new and refreshing but to find it is following along the other films lines it just left a bad taste in my mouth.

I did enjoy this movie right up to the point where the explanation for the whole silly town was explained - what a huge let down. What a complete cop out!!! I expected it to be for some riveting reason but instead to hear the same silly explanation similar to The Maze Runner just left me feeling completly deflated. To hear that it was an experiment on how to live in peace is just rediculous and loses all credit to the story, especially considering the town has exsisted for two hundred years. Just silly no other word for it! Now this second installment jumps straight into it. Not much in the way of a refresher, seeing as the first film came out a while ago, so I found myself a little confused. Trying to remember who all the characters were, and why they were suddenly fighting each other. This sequence ends up getting interrupted by armed forces trying to catch them, and this becomes a rather common theme throughout the film. There are very few proper slow parts to the film. Every time the film begins to slow down, they have to rush off to escape another attack attempt. It allows the film to progress at a rather accelerated rate, without having to worry too much about logic or planning, but it also means the plot generally seems to lack coherent logic and planning.

The actual factions play much less of a focus in this sequel (unless you consider refugees and those that are factionless to be faction), and that does help the film be a bit easier to follow. The factions do still have purposes, and the different roles are relevant, but the character groups are generally downplayed to just Tris' team, Jeanine's team, and 'others'. The actors and actresses from the original film return, but some have much smaller roles, to the point that I couldn't really see the point of them appearing at all.

The film introduces a new major character, who has a very minor part to play in the film, but whose significance in the next film is implied. If it weren't for this character, I would certainly have been happy finishing this Divergent story at two films. Nearly every plotline is covered, and has a happy ending.

Sophie, an average teenage girl working in a hat shop, finds her life thrown into turmoil when she is literally swept off her feet by a handsome but mysterious wizard named Howl. After this chance meeting she is turned into a 90-year old woman by the vain and conniving Witch of the Waste.

Embarking on an incredible adventure to lift the curse, she finds ... more...