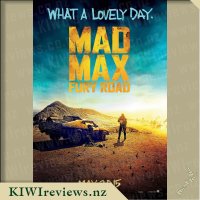 Years after the collapse of civilization, the tyrannical Immortan Joe enslaves apocalypse survivors inside the desert fortress the Citadel. When the warrior Imperator Furiosa (Charlize Theron) leads the despot's five wives in a daring escape, she forges an alliance with Max Rockatansky (Tom Hardy), a loner and former captive. Fortified in the massive, armored truck the War Rig, they try to outrun the ruthless warlord and his henchmen in a deadly high-speed chase through the Wasteland.

I am not a fan of futuristic doom and gloom movies where the world has gone to the dogs and the human race is fighting between themselves. I find them rather depressing and extremely unsettling. After watching the first five minutes I said to my husband I was not interested in it - but he said to give it a chance. I am glad I did, as it did improve and although, I would not watch it again I found myself enjoying the movie.

I can appreciate why it got so many awards. The special effects where amazing and all the cast where completly committed to their role. I was concerned it was going to be just car chases to begin with but found there was a plausable story to it which did not revolve around just men and fighting. I found the story was less about Max and more about Furiosa and her mission. Max was just the heavy hand along for the ride. There was also a bigger cast and more involved then I thought it would.

At times I found the talking could be droned out especially when Nux spoke, his mumbling could be quite difficult to understand but I also found I was more drawn to his character and wanted to find out more about him and the war boys. Also, with the possible romance in the air that always gets a big thumbs up from me.

There was the predictability factor and the extreme action shots but all and all the movie really was not that bad. I still can not understand why at the beginning Max was having the flash backs of his family and by the end they where almost forgotten. It jumped around a bit but it was still a fast, at times an enjoyable ride. The main thing that I can say about this film is that although it is a great film, I barely consider it a Mad Max film. Henceforth, in conversation I will only refer to this film as Fury Road. While undoubtedly a film that provides most of what we have come to expect from a Mad Max film; it takes place in a post-apocalyptic world, full of random clans of fighters, and a lot of highly modified cars, and mutated people. But the main thing that I found missing was having Mad Max in a vital role in the film.

This is much more of a Charlize Theron movie than a Tom Hardy one. Mad Max's role is only that of a supporting actor. Beyond that, however, the film is enjoyable. It contains a lot of the carnage and gore that we have come to expect from the franchise, with some reasonably fresh plot twists. While still exciting, I would have rather watched an assault, than a defensive escape and retreat.

Visually the film was stunning, with a variety of environments and action scenes. It had a very clean look for a dirty theme, and I would be interested to see how much gritter the film would be in black and white. I enjoyed the character of Nux, and the whole background behind it was intriguing. But it again brings me to my first point. It's not really about Mad Max at all. And that irked me to no end.

Score: 10.0
Product reviews for listing 6997: Hunt for the Wilderpeople -  Directed by Taika Waititi

An adaptation of classic Kiwi novel Wild Pork and Watercress, by Barry Crump, Hunt for the Wilderpeople tells the story of misfit kid Ricky Baker (Julian Dennison). When Rickyā ™s foster aunt suddenly passes away, heā ™s left alone with his grumpy uncle Hec (Sam Neill). The unlikely duo find themselves on the run in the vast New Zealand bush, evading child services and the law. They are forced to work together to survive and despite ... more...