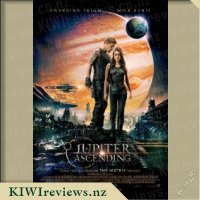 Jupiter Jones (Mila Kunis) was born under signs that predicted future greatness, but her reality as a woman consists of cleaning other people's houses and endless bad breaks.

Caine (Channing Tatum), a genetically engineered hunter, arrives on Earth to locate her, making Jupiter finally aware of the great destiny that awaits her: Jupiter's genetic signature marks her as the next in line for an extraordinary inheritance that could alter the balance of the cosmos.

You know you are watching a big budget movie when visually it is so clear and vibrant and all the colours look amazing. Even in the 'dark scenes' it still looks rich and clean. Little things like the sunset are so beautiful and the backdrop, although not really part of the movie, still makes your heart sing and you think 'wow' we live in a beautiful planet. Furthermore, the costumes/wardrobes are just stunning and the creatures are out of this world and look so impressive. Even the hair is immaculate and the head gear is mind blowing. The extravagance in the little things like the wedding scene had me green with envy - her dress, her hair, just 'wow'.

However, as much as I love Channing Tatum, I was a little concerned that the romance aspect between Mila Kunis and himself would not be entirely convincing. I find Mila can be rather hard at times and her acting range can let her down and as I feared I was correct. The big finale had me cringing as she tried to run. It seemed more like a scene out of Baywatch and not at all the life and death reality it was meant to be. You could basically tell, at times, where the director had started the scene - the way she half heartidly got up and ran a couple of feet and then you could almost hear him call cut - convincing it was not.

I kept hoping Channing would pull out a dance number and wiggle those hips but unfortunately it was all action. I think they tried to make the movie more complicated then they needed to and they jumped around a bit and lost the story line. At times they spent to long on a scene which was not really required and other times they cut a scene to short without really explaining why the event happened. My husband is still trying to figure out how the aliens knew she was going to donate her eggs. Also it didn't really explain why the lady she was cleaning for got prodded by the aliens there was just plenty of times it all seemed too rushed.

The action scenes where good and so much was always happening. It seemed to stay on track, although at times a little slow. As with any big budget movies there was lots of explosions and lots of action. But visually it kept your attention. I also admire the movie for cutting the action scenes too short periods of times instead of exaggerating it - which I find happens a lot with these sort of movies. In saying that the fake explosions in the big finale where a little over the top and just annoying. Also with almost every movie you have the tedious instrumental music and I found for the last scenes it was way to overpowering and too loud. I found myself paying more attention to the music then what was actually happening on the screen.

Although all and all not a bad movie. definitely one of the best special effects movie I am seen in a long time. Those flying crocodiles where awesome and the planet being created for harvesting purposes was a great original plot line. I like the explanation for why the dinosaurs were here it made it seem all that more plausible.