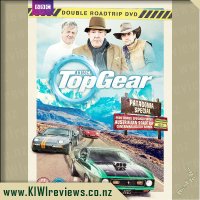 Disclosure StatementFULL DISCLOSURE: A number of units of this product have, at some time, been supplied to KIWIreviews by the company for the purposes of unbiased, independent reviews. No fee was accepted by KIWIreviews or the reviewers themselves - these are genuine, unpaid consumer reviews.
Available:
27 May 2015

This Top Gear Special features the most grueling car exploits yet, as the boys take three V8 sports cars on a 1600 mile trek through Patagonia.

The usual habitat for a Porsche 928, a Lotus Esprit and a Ford Mustang is the civilized world of tarmac, but in the hands of Jeremy, Richard and James, these three sports bred machines face swamps, deserts, forests, beaches and ski slopes as they try to get to the southernmost city in the world, in order to stage an epic game of car football against Argentina.

Along the way there are broken bones, epic backdrops, mechanical calamities and cows, plus a climax that wasn't exactly the one that was expected. It's safe to say that I am not a huge car fan. This has always been a testament to Top Gear's quality as an entertainment show, that I have always enjoyed it even though I neither care for, nor remember any of the car facts. I enjoy the pranks and the adventures. So after Jeremy Clarksons dismissal from Top Gear, seeing this DVD with two adventures, minus the to-and-froing between normal show and adventure, I knew I had to watch it.

It gets off immediately by making a statement, and pointing out how it would be an invalid statement if the show was a repeat...which of course it is at it's a DVD; instant chuckle. Off to a good start. It starts off in the usual fashion, the presenters turning up to a random collection with an assortment of cars, and completing challenges. The initial challenge appears simple, but of course we know not to expect this. You sit there waiting and waiting for the "but".

This special didn't have too much in the way of challenges for the cars though. I couldn't help thinking that they were just purposefully looking for wet patches and off-roading areas to try make it more exciting. It felt a little disingenuine, but was still enjoyable by focusing on the camaraderie between the presenters.

There were a lot of nice scenic shots and enough car troubles to keep your interest, but the fun-loving relationship is really the main thing that makes this dvd fun to watch. The pacing is much much slower than other adventures (e.g. Bolivia), with limited real "dangerous" parts. It eventually livens up when it turns into a documentary, following the "license plate" scandal that was in the news that had the team run out of patagonia. It gets very tense, and makes for a thrilling end to the main adventure.

The dvd also features their Australian adventure as well, which is a bonus! Two adventures for the price of one! Complete with jokes pointed at the aforementioned scandal.

It's safe to say that I preferred the Australian adventure. While it used more recent cars (and thus had no demolition derby style surprises), there was a better competitive story. A better competition trying to show which of the car choices was the best. and this show actually included some challenging challenges. Cow herding for the win!

When teenager Ren and his mum relocate from Chicago to a small rural town, he is not prepared for the rigorous local laws. Years ago, following a night pf partying at a dance, a car accident claimed the life of four local teens, including the son of the local minister, Shaw Moore.

In a misguided attempt to honour the victims, the reverend pushed through a town ordinance banning dancing and in the process has kept alive a memory that ... more...