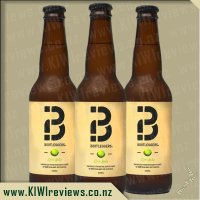 Bootleggers Lime Soda, with the welcomed aroma of fresh Hawkes Bay limes, offers a cheeky tartness free from nasties. Sweetened only by the natural oils of the limes themselves, open a bottle to discover why we saved the best of this beauty right till the last drop. Enjoy, and enjoy again for this is your guilt-free, sugar-free pleasure.

I don't think I've ever tried a lime and soda drink before, I've had lime and water and enjoyed that but never with soda. I'm not a big fan of plain soda so I was quietly hoping that this drink would have enough lime flavour to hide the bland soda taste.

On first impression I really liked the bottle, it has a nice simple label with the flavour in a different colour to the rest of the black text, a screw top cap and a very pretty drawing of a Fantail on the back with a little story as to why it relates to the Bootleggers brand. I loved the last sentence of the story, "See you later, sugar" it sounds like an endearing way to say goodbye but in the case of this bottle it also means that there is no sugar included. The little note at the bottom on the front "Smuggled from Wellington" is pretty cute too.

The screw cap is easy to remove and although I'm hesitant to put the cap back on without the drink spilling everywhere I'm sure you can do it and travel with the drink rather than drinking it all in one sitting if you wanted.

The taste was actually really nice, it was not sweet at all but you'd expect that with no sugar. It did have a taste of soda but I could definitely taste the lime too. On it's own it is a perfectly refreshing drink and if you wanted something with a bit more flavour then adding lemonade would be perfect. For an alcoholic drink adding lemonade and vodka or just gin would be delicious. I wish I had opened this drink at home so I could have tried those combinations but unfortunately I didn't so I'll have to keep an eye out so I can purchase some more.

I'm always keen to try a new drink and I've had a couple of lime and soda drinks in the past so when I was given a chance to review this I was really happy to give it a go.

My first reaction to this bottle was that it looks like it would fit right in at a BBQ, a night out or any occasion where you want a drink but can't drink alcohol. The front of the label is nice and clear as to what brand this drink is and the flavor of the drink blends with it nicely. I love the little fantail on the back and the description it gives and the fact that this is all natural and sugar free is a great thing.

I tried it on is own and really didn't like the taste, perhaps it would be because I've become used to very sweet drinks so I perservered and drank half the bottle straight but I didn't get used to the flavor and found it a little hard to swallow so I decided to use the rest of the drink as a mixer. My first try I used some of it with a dash of vodka and the two meshed together well, so after some proof that it is a good mixer I opted to use the rest of it with some green ginger wine, which on its own it very spicy but when added to the Lime & Soda... What a great mix! The lime added a great buzz to the ginger while the lime and soda as a whole helped to mellow the ginger out so I still got the heat with a dash of tart. Yum.

I know I won't be buying this again in the future to drink on its own, BUT.... I would buy this again for use as a mixer and I could easily get four drinks out of this one bottle, so great value for that.

When I saw the chance to review this, my ears pricked up as I like lime - especially in drinks, so I thought it would be a good chance to try this out. Tonight seemed a great time to try it as I was feeling tired and drained and water just wasn't doing it for me...

The bottle is lovely to look at - it looks like a grown up drink, and I can see myself taking this along to a BBQ if I was wanting to take something non alcoholic, but without feeling totally out of place. On closer inspection I noticed it was all natural, and something I hadn't realised - that it was sugar free. On one hand this was great as I prefer not to drink sugar as it seems unnecessary. But on the other hand I was worried about it being too tart without the artificial sweeteners I am used to.

At first it did seem a little tart - you could taste that familiar soda taste. But after a small glass I really did feel more awake and I was starting to adapt to it being less sweet than what I'm used to. The flavour is mild, but quite pleasant. I wasn't wanting to add alcohol tonight, but gosh it would be lovely with a splash of gin or a little something like that in it.

There is a growing market out there now for sugar free options, especially those without artificial sweeteners, and I love the idea that there is something like this that I can serve that is a bit healthier than what I normally serve up. This probably wouldn't be something that I buy a lot of, but the price is similar to other quality individual servings of drinks, so I might be tempted to buy it again for the right occasion.

The first time I heard of Bootleggers was via some market gossip that there was a Wellington crew making craft soda. It sounded great but I couldn't find an easy source for it. Roll forward to a few weeks ago, when it was hubby's birthday he took us out to a place that does craft beer and pizza. There we were, looking at the drinks menu and Bootleggers was on it! This was fate, because I was sober driving. I tried pretty much every flavour they had, including this soda and lime.

Now this is probably their more plain drink they do. It's soda water with some lime in it. It's tart, and tastes of that familiar plain soda taste. There is no added sugar. In a lot of ways it could be a bit boring. However, for me, I was out drinking with friends and I wanted something that tasted like it could be something more than just lemonade. It felt more grown up.

My preschooler tasted this one and turned her nose up at it. She likes sodas but clearly that more adult flavour to it, did nothing for her. Good, I thought - more for me. Tonight, I got to try the Soda and Lime flavour again, but this time I did it with some gin. Wow, up another notch. I think if a G&T is your sort of thing, this would be pretty special for you.

If you were into something a bit more sweet, then you could always kick that sweet up by adding some fruit flavoured spirits. This drink was refreshing enough on its own. But as a mixer it is also very versatile, and could do the gin thing, a vodka soda or a full on cocktail. $2.50 a bottle is not too bad. It's on par with other craft sodas at the supermarket. Obviously, you'd pay a bit more at a restaurant. I think if you care about buying local and you are looking after your health and cutting sugar, this would be a great option for you.

Apart from at the restaurant the other day, and then again at the recent Food Show, I haven't managed to see this around to buy. I think I would buy this one again, if I was out or going to a party. I've only marked it down slightly, as I liked the other flavours perhaps a little more. But this one, is the one I don't have to share and that counts for a lot.

Score: 7.1
Product reviews for listing 2143: Verve
Purchased from Local Representatives near you

Because slowing down is not an option, there's Verve! With a convenient and fast-acting boost of energy, Verve refuels and revives your body quickly without a jittery feeling or energy crash.* The tropical fruit flavor, patterned after the very popular mangosteen fruit, tastes great!