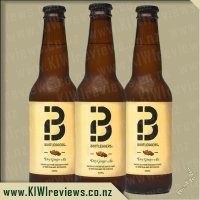 Introducing our prohibition inspired masterpiece. Ginger, fresh lime and cinnamon combine to create a fresh, rounded Dry Ginger Ale- completely unique, unreservedly irresistible. From dawn at the bach to dusk at the bar - consider this your invitation to join the party.

I managed to request this product for review! Ginger ale has been a favourite of mine since I was knee high to a grasshopper. The instant appeal of this product played to my interests - a long loved favourite beverage in a glass bottle with a funky logo and cleanly designed label. Ginger ale should be in glass - and this ticked the box, complete with a twist off cap for ease of access.

My first impressions were that this was quite a dark ale, and there was quite a bit of settlement in the bottle. I replaced the cap and lightly inverted the bottle before pouring the drink into a glass and still found a lot of settlement in the bottom. The first sip was smooth - a light fizz that wasn't overpowering, subtle spice and a slight hit of ginger. As I continued to sample the delights of this beverage I can't say I grew to like it. This ginger ale seems to lack the ginger hit I was expecting.

For those who like a more subtle flavour this drink is for you. If you like more of a ginger hit and fizz in your ale then I wouldn't recommend you buy this product. The price is fair for the profile of the drink however I don't think I would buy this flavour again - I am interested in the other products by Bootleggers and will give them a try in future.

I really wasn't impressed with the "Ginger Beer" variety, but I had already picked up this one to review too, so figured I'd try to give as unbiased a review as I could.

This "Dry Ginger Ale" variety quite clearly had some large suspended solids confined in the bottle. So I tried to gently invert the bottle to mix all of the goodness together. Pretty rookie mistake there, as I clearly wasn't careful enough, and ended up fizzing all over the couch. Oh well. Didn't lose too much of the beverage and well the fizziness is generally a good sign of quality.

Once I cleaned up my mess, I finished opening the bottle and saw the solid bits were stuck to the side of the bottle and the bottlecap. The solids remind me a lot of the cultures from brewed probiotic drinks, so I knew that there was nothing to be concerned about. The bottle itself looked great, very simple, and yet would look at home during parties and BBQs.

I poured the drink into a glass, and found the drink to be very dark, and murky, and has a lot of suspended particles that will eventually sink to the bottom of the glass. Tastewise, it was not the strongest of flavours, but it definitely tasted of dry ginger ale. The carbonation level isn't over the top and the flavour isn't quite as sharp and bitter as the 'Schweppes' brand. It is very relaxed, mellow, and it suits this beverage.

The flavour is subtle enough that to some it may taste "watered down", so wouldn't necessarily be the best choice for mixing with alcoholic drinks. But as a standalone drink, it was enjoyable, and cheap enough for me to consider having it again in the future.

Guinger Ale has been one of my favourite drinks for a long time, I have never had any of the alcoholic versions, but the normal fizzy types I have had on many occasions. Compared to those varieties, this brand of Ginger Ale came close, but it was rather distinct in some aspects. First off, I don't recal having a "Dry" Ginger Ale before, and I think that may have been for a good reason.

While the drink itself wasn't bad, I didn't really like the dry sensation on the back of my throat. This sensation was light, however, it wasn't harsh like I expected it to be, but it was there nonetheless. The flavour itself was quite nice, it tasted quite natural, not quite as sugary as most of the other types I've had, but instead it had more of the ginger flavour.

This natural taste was the big upside to the drink, and also looking at the ingredients on the label I saw that this drink also contains traces of Lime juice and caramelized sugar, which I think gave the drink the pleasant hints of tartness and sweetness I detected. I think that this Ginger Ale is a good drink, I would say it only loses a single point on the scale of flavour simply due to the dryness, but I would still recommend this product to anyone who loves Ginger Ale, as this was still a pretty great drink!

I picked up a bottle of the Bootlegger's Ginger Ale while I was at the recent Food Show at Mystery Creek. Although I had heard of the soda maker in recent months, I had only recently tried some of their drinks and I was keen to take some bottles home to experiment with. I selected this one and their dry lemonade.

I love ginger ale, and sometimes prefer the flavour of a ginger ale over a ginger beer. For this reason, I was pretty delighted that these guys do both style of ginger drink. All their sodas have a grown up taste about them. They are more natural flavoured and have a bit less sugar than your average soft drink. The fizz is softer as well. The addition of the flavours of lime and cinnamon make this a little special too. I could easily drink this drink straight or with a bit of whiskey or vodka.

But I'm not the sort of person who can just sit back and drink a drink. I have to have a wee play, and I was so pleased that I did. As my hubby was out of town, I had free reign on the kitchen and meals. So I got some pork chops for dinner. This is something I just can't do while he is in town. He doesn't do pork, aside from bacon. I took my pork chops and I soaked them in a mixture of soy sauce, a spice rub and some of this ginger ale. Once it had soaked for a few hours, I then baked them in the oven.

As I turned them in the oven to cook, I also basted them with the mixture a few times. The result was a lovely, sticky coating to the meat. I served these with rice and a few vegetables (not pictured). Both of my children liked the meal and I found the pork chop came out beautifully with this wonderful ginger flavour. It was so good I was a little sad that the kids liked it!

This is definitely on my list of "buy again" sodas. A great flavour, and excellent level of fizz for me - I hate overly fizzy drinks. The price is on par with what I'm willing to pay at a supermarket for something a bit special. I would not hesitate to purchase this again.