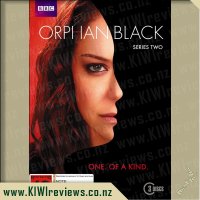 Leaving Sarah to navigate a dangerous world of new enemies and shifting allegiances. She sets off fighting for survival & willing to risk everything to find her missing daughter Kira and foster mother. Unsure who to trust, she starts an all out war against immense forces. A powerful member of the Dyad group of companies, clone Rachel Duncan, has been tasked with negotiating the allegiance of Sarah and the other clones. She'll stop at nothing to complete her mission, using those who love Sarah as leverage, including confidant Paul Dierden. But Sarah is willing to risk everything and employs scorched earth tactics that inevitably imperil the clones.

I finally managed to sit down and watch season two of Orphan Black as despite many mixed reviews online I was still keen to see where Sarah, Allison, Cosima, Helena and Kira all ended up (especially after the first seasons finale) and what secrets might be uncovered next.

Things set off at a fast pace as Sarah hunts for hre daughter, trying to find out just who has taken her and just how much she can trust Mrs. S who is a whole bundle of secrets herself. Sarah throughout the season is trying to find something, anything, that will help keep Kira out of Dyad's hands, even so far as to leave Kira with her father to keep her safe. Cosima is desperatly trying to find a cure for her worsening condition, Allison is trying to recover from her friends death and subsaquent marriage issues and Helena is having to deal with some religious crazies who want her to breed.

Each character is given a decent amount of time, even though it still centers on Sarah, we learn more about everyone, including a lot more on Rachael and what her childhood was like (as the only self aware clone) and we get more tidbits as to what is going on behind the scenes. A lot of the history of the clones is still a mystery, so there is plenty to grow upon for the next season, we even find out about two more clones, plus a big reveal at the end (which one can assume is coming but revealling the who was well done) means I want to know more and since season three is airing now on TV you can guess what I"m going to be watching tonight.

Score: 9.8
Product reviews for listing 2327: Charles Darwin and the Tree of Life -  Type of Show: Documentary

A personal insight, from the world's favourite naturalist, into Darwin's theory of evolution, exploring why it is more important now than ever before.

Passionate Darwinian Sir David Attenborough shares his deeply personal views on the genius of evolution in this one-hour documentary. Exploring the origin of Darwin's great idea, he makes a powerful case for the importance of the science of ... more...