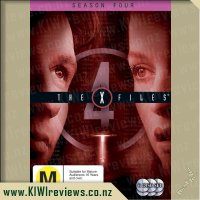 The fourth season begins with the near death of Mulder's mother and the murder of the mysterious X. The return of Alex Krycek and the alien black oil are overshadowded by Scully's cancer. Then the tragic reappearance of Max Fenig leads to the death of a fellow FBI agent. Yet even as these events strengthen Mulder's belief in a growing conspiracy, a startling truth revealed to Scully plunges him into a crisis of faith which could prove his ultimate undoing.

Season Four sets off with the Bounty Hunter on the move again with Mulder trying to find a way to save his 'sister'. About eight episodes in the series concentrate on the 'Alien Mythology' that is running through the series and the rest go by their "monster of the week" episodes, so you don't have to know what the heck Mulder is going on about. Whilst thinking about Mulder, I have to say that a fun episode was "Small Potatoes", particularly when the perp makes a run for it and Mulder rolls his eyes... Here we go again...

The "Leonard Betts" episode, whilst a stand alone episode is rather inegral to the series due to a revelation for Scully.

The acting in this series has only been getting better and whilst there are still moments where Mulder really, and I mean really, gets on my nerves, the flow between Mulder and Scully has found its sure footing and there are some great moments with the two of them. The settings are well done, one episoe puports to be the most expensive set desigined for the series. I do like that the entire series didn't focus solely on aliens but I would have been happier with a few more monster of the week stories. The season finale cliffhanger is crap, but given that most of the season was pretty good I shall forgive it its bad script.

The name of the company is recognition of the grand masters of Russian Classical Ballet School and the Imperial Family who made such a ... more...